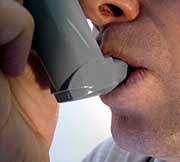 This newly-identified disease has symptoms identical to asthma, but is induced by exposure to chemicals. Symptoms include difficulty breathing, continuing cough, wheezing, and shortness of breath.
"Symptoms occur after only one exposure to a lung irritant. Many patients overcome the condition within six months, but others continue to be symptomatic for five years.

The following criteria are needed to confirm a RADS diagnosis: People injured on-the-job by chemical exposure, now have available a means of proof of injury via the methacholine challenge test which confirms airway hyperresponsiveness.

Injuries typically occur on-the-job, for example, hospital employees working in endoscopy units have recently been identified as suffering from RADS due to exposure to glutaraldehyde, widely considered one of the best disinfectants for cold sterilization. Glutaraldehyde was thought to pose little risk and it is normally used in unprotected, open environments. Reasearchers now report that methacholine challenge testing confirms a definite association between glutaraldehyde exposure and respiratory symptoms.

Other examples include firefighters exposed to irritants before and after the World Trade Center (WTC) disaster. The "World Trade Center Cough" is defined as a persistent cough that developed after exposure to the site. The cough is often accompanied by airway obstruction, nonspecific bronchial hyper-responsiveness, and clinical signs and symptoms of asthma.

Loosing the ability to enjoy clear breathing is a major, significant and life threatening injury. Juries now have the ability to legally hold accountable manufacturers and sellers who neglect to properly warn the public concerning the possibility that their could cause RADS/IIA.

If you or a loved one has suffered damages from chemical exposure, you may qualify for damages or remedies that may be awarded in a possible class action or lawsuit. Please fill in our form on the right to submit your complaint to a lawyer for a free evaluation.
Stay Informed
Get the latest on class action lawsuits, settlements & more! Subscribe to our free weekly newsletter.
Get our Newsletter!
Submit a New Complaint
Been wronged by a similar product or service?
Click here to send us your complaint.

Posted by
Kentucky
on September 29, 2009
Diagnosed with RADS and Occupational Asthma in October 2008. I am not able to work in my field or any other field. I am still under doctors care and my company is taking no responsibility for my injuries. I have lost my home due to foreclosure and my family is suffering . I am married with three small children. My life has been severely impacted by this disease.