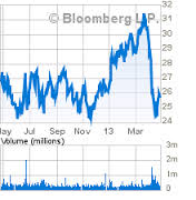 San Diego, CA A securities fraud class action complaint has been filed in the U.S. District Court for the Northern District of California. The complaint alleges that officers and directors of XOMA Corporation (NASDAQGM: XOMA) violated the Securities Exchange Act of 1934 between November 6, 2014 and July 21, 2015, by making materially false and misleading statements about XOMA's business prospects. XOMA discovers and develops antibody-based therapeutics in the United States, Europe, and the Asia Pacific. The company developed gevokizumab, a drug believed to have the potential to address the inflammatory causes of a wide range of diseases with unmet medical needs.

According to the complaint, XOMA initiated three clinical trials to evaluate gevokizumab for the treatment of, among other things, Behcet's disease uveitis, a multisystem inflammatory disorder most commonly involving the eyes which could lead to blindness. Among the three trials is the Phase 3 EYEGUARD-B study for patients with Behcet's decease uveitis outside of the United States. The complaint alleges that the company repeatedly made material representations concerning the imminent commercialization of gevokizumab, which in turn artificially inflated the prices of XOMA's securities. Specifically, the company led investors to believe that the Phase 3 study would be concluded successfully and that approval from the U.S. Food and Drug Administration would then be sought.

On May 28, 2015, XOMA informed the market that it had reached its target exacerbation event as specified in the gevokizumab study, causing an increase in trading and leading to nearly an 8% jump in its share price on the day of the news. However, on July 22, 2015, XOMA revealed that the study did not meet the primary endpoint of first acute ocular exacerbation. On this news, XOMA stock fell$3.48, or over 79%, to open at $0.91 per share on July 22, 2015 on extremely high volume.

If you have suffered from financial losses, you may qualify for damages or remedies that may be awarded in a possible XOMA Corporation securities class action lawsuit. Please click the link below to submit your complaint for a free evaluation.

Posted by
Kenneth Fantasia
on March 23, 2017
Please update me with the result of class action suit. Thank You
Posted by
Theodore Gwin
on January 29, 2017
I contacted Robbins Arroyo LLP (Daniel Donohue) about my $10,000 loss. That was last August and have not heard anything since even after I sent an email to get an update.
Posted by
Shah S
on March 15, 2016
I had received a mail from Levi & Korsinsky LLP, back in Jul'15 asking to nominate them for filling legal action against Xoma Corp for the losses incurred by investors. I have not heard back from them since then. Pls update on this matter.
Posted by
Scott Green
on February 13, 2016
I bought 10,000 shares during that time and lost over 37,000, I would like to be kept in the loop with any news on this matter. Thank you.
Posted by
Andrew Tarapacky
on November 23, 2015
I have sustained about $14K of losses primarily on about 2500 XOMA Shares and 10 XOMA March 5.5 Call options. Please advise whom I need to contact to officially be part of the class-action lawsuit.