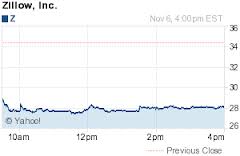 Atlanta, GA: A securities class action lawsuit has been filed on behalf of investors who purchased common stock of Zillow, Inc. ("Zillow" or the "Company") (Z) between February 15, 2012 and November 6, 2012.

The lawsuit, which was filed in the United States District Court for the Western District of Washington, alleges that Zillow executives violated the federal securities laws by misrepresenting certain information in connection with the Company's real estate agent subscription growth and cancellation rates.

While the stock was artificially inflated, according to the complaint filed against Zillow, Company insiders sold 3.1 million shares of their own Zillow stock for proceeds of nearly $115 million, including $103 million worth of stock sold by the officers named as defendants. The Company also conducted a public offering on September 6, 2012, raising $156 million in proceeds. Then, on November 5, 2012, Zillow announced its third quarter 2012 financial results, reducing its fourth quarter and full year 2012 revenue guidance and revealing revenue expectations that fell below analyst estimates.

Zillow also announced that its estimates of home valuation, referred to as "Zestimates," had lost a large displayer advertiser, Foreclosure.com, and therefore defendants expected weakness in the Company's display advertising business. The value of Zillow's stock declined significantly on these disclosures, closing at $28.15 per share on November 6, 2012, a one-day collapse of nearly 18%, on volume of 7.4 million shares.

If you have suffered from financial losses, you may qualify for damages or remedies that may be awarded in a possible Zillow Inc securities class action lawsuit. Please fill in our form on the right to submit your complaint for a free evaluation.