Brass plumbing fittings for Pex plumbing systems sold by Zurn Pex, Inc. are allegedly fail prematurely. Reports of failing fittings appear to be escalating. And that's where the concern lies—the brass fittings that join two pieces of flexible PEX pipe together are failing with the potential to cause water and mold damage. 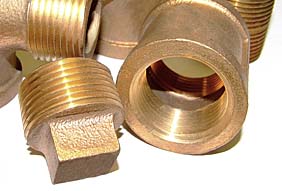 Homeowners claim brass fittings used to make connections in Zurn Pex systems were incorrectly designed and manufactured. As a result, the homeowners allege the fittings fail prematurely, sometimes within a year after installation. Substantial water damage may occur when the fittings fail.

PEX (a generic term for cross-linked polyethylene) plumbing systems use flexible plastic tubes which are attached to brass fittings, instead of the traditional copper piping. Brass fittings are subject to "dezincification" which leaves the fittings subject to corrosion and failure.

Zurn Pex Inc. has sold more than a million of the brass Pex fittings. While originally honoring its warranty, since receiving hundreds of claims from homeowners for damages resulting from the faulty fittings, Zurn Pex has stopped paying claims, and homeowners must for the damages themselves.

If you have suffered damages from defective Pex plumbing, please fill in our form on the right to send your Zurn Pex Inc. complaint to a lawyer who will evaluate your claim at no cost or obligation.
Stay Informed
Get the latest on class action lawsuits, settlements & more! Subscribe to our free weekly newsletter.
Get our Newsletter!
Submit a New Complaint
Been wronged by a similar product or service?
Click here to send us your complaint.
RELATED NEWS
More News

Posted by
Alabama
on June 5, 2008
Floors, cabinets, bathrooms (3), utility room, kitchen, doors, sheetrock. We had to pay out of pocket for each leak until we had the whole house replumbed. Insurance went up - we payed for the house to be replumbed - had our water tested - contacted the U.S. Brass Consumer Center.