This is a settlement for the Cracker Barrel Faces Unpaid Wages Class Action Lawsuit lawsuit.
March 16 2015 - by Lucy Campbell 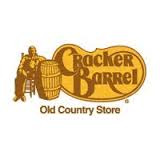 Los Angeles, CA: A settlement has been reached in a potential unpaid overtime class action lawsuit filed against Cracker Barrel Old Country Store Inc. by an employee who alleged the restaurant chain failed to pay associate managers overtime. Terms of the settlement are not currently available.
Filed last April by Kenneth L. Proper, an assistant manager in an upstate New York eatery, the complaint alleged the chain of restaurants and gift stores was in violation of federal and state labor law and New York State Department of Labor codes, rules and regulations.

In the lawsuit, Proper alleged that despite being classified as a salaried employee, he performed duties that are not defined as "professional"under the federal Fair Labor Standards Act (FLSA) and state labor code therefore entitling him to overtime pay for the more than 40 hours a week which he regularly worked.

The lawsuit further claimed that Cracker Barrel failed to reimburse associate managers for expenses incurred when driving their own vehicles between restaurant locations for delivery and pickup of supplies.