If Michelle didn't know about prior contact lens solution recalls such as Renu, she might not have googled AMO Complete MoisturePlus. And then she sought medical help immediately was because the ID number on her bottle of AMO had been recalled.

On June 22, 2007 Michelle wore her contact lenses so she could play baseball (she doesn't wear them all the time) and later that night her eyes were sore. "The next day the pain was worse and there was some discharge so I wore my glasses," says Michelle. "It got worse and worse so that is when I googled AMO Complete Moisture Plus." 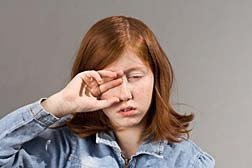 But Michelle had no idea that it had been recalled. "We didn't read about it or see it on TV or hear about it from the radio," says Michelle. "My husband reads the Hamilton Spectatornewspaper cover to cover and I read The Metro every day—not a word.

"The only way I knew to seek medical attention immediately was because when I googled AMO, the Health Canada site came up so I contacted them."

The site says that, if you have contracted Acanthamoeba keratitis (AK): a rare, but serious infection of the cornea, and if you catch it right away, there might be less complications later. It also states that this infection can lead to a cornea transplant or even blindness...

Michelle called her doctor right away and was referred to an ophthalmologist. "I told him my symptoms and mentioned the AMO recall; he wanted to make sure that I did not have Acanthamoeba keratitis," says Michelle. " He couldn't determine what was wrong so he just prescribed antiobiotics and sent me on my way.

"That was Tuesday. By Friday I hadn't seen any improvement so I called him back. 'If you aren't better after the long weekend, come back Tuesday,' he said. He just put me on the same drops for another week and said come back next week!

All this time I kept telling him how painful it was. 'Try Advil,' he said. By now there was a disturbance in my visual field, like a film that I couldn't see through. Before that I had blurred vision but this was considerably worse. And the pain was unbearable.

By the time my husband got home from work I was in tears: he took me to ER.
At the hospital, they put drops in to freeze my right eye. The doctor took scrapings and told me to see him the next day. They took pictures and tried to get me broline but there was none to be found in North America - they finally found some in Ireland, six days later."

Why was broline so scarce? Could it be that a sudden demand due to eye infections outweighed the supply?

"I took my contact lenses and the case and the bottle of solution to the hospital," says Michelle. "The ophthalmologist took more scrapings and sent all of it to the lab. The results came back the next day: confirmed positive for Acanthamoeba keratitis.

"Since the diagnosis I have been seeing this ophthalmologist two or three times a week. I am currently on four kinds of meds and put drops in my eyes every waking hour and I put ointment in my eye overnight. The pain is incredible. There has not been a night that I haven't woken up with the feeling that the cells of my eyeball have been ripped off and stuck to my eyelid.

There isn't much relief when I am sleeping either. When my eye moves in REM I wake up with a searing pain—this has been going on for 10 weeks.


READ MORE LEGAL NEWS
More News
As for my prognosis, there isn't one. I haven't been outside except for doctor's appointments. I went to my little girl's baseball finals last week - luckily it was overcast. Even then I wore dark glasses, a baseball cap and the hood of my shirt over my head. I had my entire head covered except for one tiny hole where I could see through my good eye. I managed to stay outside for two hours then I had to come inside to complete darkness.

I saw the cornea specialist yesterday morning and had my eye scraped again—this time he used a scalpel. Right now he is checking to see if the amoeba is gone. All the time the cells in my eye are deteriorating.

Tomorrow (August 24th) I might find out if I can get a cornea transplant but they have to get rid of the amoeba first and heal the defective cells before they can go forward with any treatment.

Sometimes it feels that I have glass or onion juice in my eye. All I can do to ease the pain is to keep my eye completely still. I lie on the couch, turn all the lights off and listen to books on my cassette recorder. And wait..."

If you or a family member developed an eye infection or blindness in Canada after using AMO Complete MoisturePlus Multi-Purpose lens solution, please contact a lawyer involved in a possible [AMO Lens Solution Canada Lawsuit] who will review your case at no cost or obligation.
Request Legal Help Now