Investigations of Anemia Drug Profiteering Far from Over Part II


According to US Renal Data System and the Medicare Payment Advisory Commission, Medicare spends about $64,000 annually for each person on hemodialysis for all medical services, and the anemia drugs Procrit, Epogen and Aranesp are the single largest drug expense for Medicare. 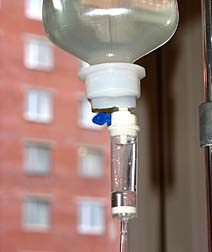 Amgen produced the synthetic epoetin in 1989 and sold it under the brand name Epogen as a treatment for anemic kidney patients and HIV related anemia. Shortly after Epogen came on the market, Amgen entered into an agreement to allow J&J to sell the same drug under the brand name Procrit, as long as it stayed out of the dialysis market, which basically helped the young company raise capital.

In 1993, J&J received approval to sell Procrit as a treatment for cancer patients with chemotherapy-related anemia, and a few years later, Amgen gained FDA approval for the long-lasting version of the drug, Aranesp, to treat both renal and chemotherapy related anemia.

Recent investigations have shown the drug makers are providing incentives to encourage the over-prescribing of ESA's to Medicare patients by charging less for the drugs than the Medicare reimbursement rates. A March 2006 government report entitled "Medicare Reimbursement for New End Stage Renal Disease Drugs," found freestanding dialysis facilities on average were able to acquire Aranesp for between 14 and 27% below the Medicare reimbursement amounts in 2005.

On May 10, 2007, due to reports of rampant over-prescribing of the drugs for uses and doses not approved by the FDA and the deaths and injuries to patients as a result, the Oncology Drug Advisory Panel (ODAC) voted 15-2 in favor of adding new restrictions on the use of the drugs and voted 17-0 in favor of requiring the drug makers to conduct new clinical trials.

However, experts say the recommendations come about ten years and probably tens of thousands of deaths and injuries too late, because the FDA was made aware of the serious health risks associated with ESA's in a report on the Amgen sponsored Normal Hematocrit Study back in 1996, and the FDA did little more than revise the product labeling a wee bit.

The 1996 study was designed to evaluate whether patients with chronic renal failure undergoing dialysis had fewer cardiovascular complications if the ESA was administered to attain a higher hematocrit level as compared to a lower level. The trial was terminated early because of a finding of more deaths and non-fatal myocardial infarctions in the patients randomized to the higher hematocrit target level.

The labeling revision recommended that the ESA's not be used to achieve hematocrit in excess of 36%, or a hemoglobin level of 12 g/dL and was accompanied by the sponsor's agreement to conduct a study to further examine the risk for blood clots among patients receiving ESA's because an increased thrombotic risk was suspected to be one of the causes for the risks detected in the study, according to the FDA.

So ten years later, two clinical trials and an editorial finally appeared in the New England Journal of Medicine in November 2006, to report the risks associated with the use of ESA's in the treatment of anemia from chronic renal failure.

The Correction of Hemoglobin and Outcomes in Renal Insufficiency (CHOIR) study showed increases in serious and potentially life-threatening cardiovascular events when Procrit was administered to reach higher hemoglobin levels, and the Cardiovascular Risk Reduction by Early Treatment with Epoetin Beta (CREATE) study trended toward more cardiovascular events in a pattern similar to the CHOIR study, thus strengthening the findings of the CHOIR study, the FDA said.

On June 26, 2007, Dr John Jenkins, Director of the FDA's Office of New Drugs Center for Drug Evaluation and Research, testified at a hearing before the House Ways and Means Committee and said the study findings "underscore the importance of the warnings previously described in the labeling for Procrit, Epogen, and Aranesp regarding cardiovascular risks that include thrombotic events and increased mortality in hemodialysis patients who participated in the Normal Hematocrit Study."

He told the Committee that the new studies, combined with the findings from the Normal Hematocrit Study, showed that patients with anemia due to chronic renal failure, whether or not receiving dialysis, "were at increased risk for serious cardiovascular complications when ESA's were administered to attain hemoglobin levels in excess of the 12 g/dL level recommended in the ESA product labels."

Dr Jenkins also said the FDA became aware of safety concerns about the use of ESA's in cancer patients receiving chemotherapy between 2001 and 2003, when the agency received reports from two trials (BEST and ENHANCE) that demonstrated higher mortality and more rapid tumor growth when the ESA's were given to maintain hemoglobin levels of greater than 12 g/dL and the findings were discussed at a May 2004 meeting of the ODAC.

He said the new safety data was added to the labeling for ESA products shortly after that meeting and that the advisory panel recommended additional data be gathered to further evaluate the new safety concerns about patients with cancer.

However, according to Dr Jenkins, it was not until late 2006 and early 2007 that the FDA was informed of several new trials in cancer patients that raised additional safety concerns.

In December 2006, the ESA makers informed the FDA of the interim results of the Danish Head and Neck Cancer Study Group trial (DAHANCA 10), a trial that compared radiation therapy alone to radiation therapy plus Aranesp in the treatment of advanced head and neck cancer.

The trial assessed whether treating anemia to achieve and maintain a hemoglobin concentration of 14.0-15.5 g/dL during radiotherapy would improve local-regional disease control.

The data monitoring committee for this trial found that 3-year local-regional control in patients treated with Aranesp was worse than for those not receiving Aranesp. Overall survival time also favored those not treated with Aranesp, he said, and the monitoring committee recommended the ESA treatment be stopped in the experimental arm on December 1, 2006.

Dr Jenkins said the FDA was notified in January 2007 of the results of a 989 patient trial of Aranesp in cancer patients with anemia who were not receiving chemotherapy when the target hemoglobin in the Aranesp treatment group was 12 g/dL.

The FDA's analysis of the study data, he told the Committee, demonstrated that Aranesp did not significantly reduce the need for red blood cell transfusions and showed an increase in mortality in patients receiving Aranesp compared to those receiving placebo.

He said the FDA was also notified in February 2007 of the final results of a double-blind, placebo-controlled study that was designed to evaluate whether Epoetin alpha improved the quality of life for patients with non-small cell lung cancer who were not receiving chemotherapy with the dose titrated to maintain a hemoglobin level of 12 to 14 g/dL.

However, according to Dr Jenkins, this study was closed down in December 2003 after enrolling only 70 patients because its data monitoring committee found higher mortality rates in patients treated with Epoetin alfa.

Dr Jenkins also explained that in 1996, the FDA approved the indication for use of ESA's to reduce the need for blood transfusions in patients with hemoglobin values between 10 and 13 g/dL scheduled to undergo non-vascular, non-cardiac surgery.

Here, too, the approval was accompanied by a commitment to complete a post-marketing study to evaluate the risk for thrombotic events among patients who were not receiving preventive therapy with anti-thrombotic drugs.

In this case, according to Dr Jenkins, the FDA only received the results of this post-marketing study in 2007. Specifically, he said, the FDA was notified in February 2007 of the preliminary results of a trial with Procrit compared to the standard of care in patients undergoing spinal surgery.

"In this trial," he said, "the frequency of deep venous thrombosis in patients treated with Procrit was 4.7 percent (16 patients), a rate more than twice that of patients who received usual blood conservation care (2.1 percent, seven patients)."

On June 26, 2007, Robert Vito, Regional Inspector General in Philadelphia at the US Department of Health and Human Services' Office of Inspector General, testified at a hearing before the House Ways and Means Committee subcommittee and described cases where dialysis centers have been found to be overbilling Medicare for the anemia drugs.

He discussed a 2004 audit of payments to DaVita for ESA services provided at one Philadelphia dialysis center, which found that 44 of the 143 claims reviewed did not meet Medicare payment requirements.

In some cases, he said, they identified inconsistencies between the number of units prescribed in the physician order and the number billed to Medicare and also identified instances in which the drug was still administered to the patient after the doctor had ordered its discontinuation.

As another example, he told the committee that, in 2005, Gambro Healthcare, owner and operator of over 500 dialysis centers, agreed to pay over $350 million to resolve civil and criminal fraud allegations in the Medicare, Medicaid and TRICARE programs. To resolve its civil liability, he noted, Gambro paid $310.5 million for submitting false claims to Medicare and paying doctors improper remuneration related to their medical director services.

The new CMS reimbursement rules stipulate that cancer patients receiving chemotherapy should only use ESA's if their hemoglobin levels fall below 10 and also limit the duration of therapy to a maximum of eight weeks after the completion of chemotherapy. They also limit the starting dose to match the FDA recommendations and limit the levels by which doses can be raised and Medicare will not cover treatment for anemic cancer patients who are not receiving chemotherapy or radiation.

The subpoena from New York Attorney General is just the tip of the iceberg when it comes to Amgen's legal woes. The company's failure to disclose the results of a Danish study in head and neck cancer has resulted in an inquiry by the SEC and several shareholder lawsuits.??
According to the SEC filing, a class-action lawsuit was filed on May 11, 2007, in California, alleging that Amgen and its executives "made false statements that resulted in a fraudulent scheme and course of business operated as a fraud or deceit on purchasers of Amgen publicly traded securities."

On May 14, 2007, the company was also served with a shareholder demand on the board of directors to establish a "special litigation committee" to investigate potential breaches of fiduciary duties by current or former officers and directors of the company, according to the filing.

The shareholders allege that these individuals violated core fiduciary duties, causing Amgen to suffer damages, and seek to recover damages resulting from their breach of fiduciary duties, monies and benefits improperly granted to them, insider trading proceeds and all costs associated with the inquiry by the SEC.

If you or a loved one has suffered negative side effects from Aransep, Epogen, Procrit, or other anemia drugs, please contact a lawyer involved in a possible [Aranesp, Epogen, and Procrit Lawsuit] who will review your case at no cost or obligation.
Request Legal Help Now