Bayer Cropscience has agreed to pay rice farmers from Arkansas, Louisiana and Mississippi a total of $750 million in an historic settlement after an experiment genetically modified type of rice escaped from one of its test fields and contaminated US crops. 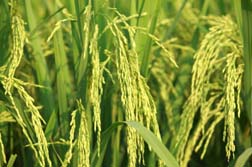 When the Europeans discovered US rice imports contained genetically modified strains, it slammed its doors closed to American rice farmers and delivered a devastating blow to the livelihoods of some 2,500 farmers in the southern US.

"Bayer came into this country to do some experiments with genetically altered material," says Powell, "and they have a duty to comply with the rules and regulations of the US Department of Agriculture, which requires those experiment strains confined within a field trial."

"Bayer did not do that," adds Powell. "Its gmo rice was allowed to escape and when it did, it got into the commercial rice supply and the markets crashed."

And US industry is not insignificant. The US, particularly the Mississippi Delta area, produces 12 percent of the world's rice supply and has a value of close to $2 billion annually.

The Bayer Cropscience offer to settle comes after a series of six so-called "bellwether trials" in the federal and state courts aimed at providing the parties with some indication of how juries would perceive the situation.

All six trials returned for the plaintiffs and the Roanoke trial resulted in a $45 million verdict awarded to a group of rice farmers also represented by Powell.

Rice farmers represented in the litigation are by and large families who have been involved in the rice-growing business for generations, operating farms that have been passed down through the generations.

"The clients I have spoken to are pleased with the results," says Powell. The problem is, however, that the contamination represents almost a type of permanent injury.

If you or a loved one have suffered losses in this case, please click the link below and your complaint will be sent to a food and drug supplements who may evaluate your FOOD SUPPLEMENTS claim at no cost or obligation.
Request Legal Help Now