Crocs Inc. (Nasdaq: CROX) faces two shareholders lawsuits alleging the company violated securities laws. The two lawsuits were filed after the company announced that its revenue for the third quarter had fallen below expected levels.

One suit was filed in Denver federal court on behalf of shareholders who bought stock in Crocs between July 20, 2007 and October 31, 2007. The suit was filed against the company and also names Crocs CEO and President Ron Snyder, and CFO Peter Case. Plaintiffs allege that the defendants gave false and misleading statements that misrepresented the company's financial situation and withheld important information about distribution problems in Europe and Japan. Furthermore, shareholders allege that the company made positive statements about its earnings and prospects even though it knew about the negative developments. 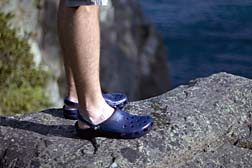 Meanwhile, an earlier suit was filed on November 8th. The lawsuit, which seeks class action status on behalf of shareholders, alleges Crocs "deceived the investing public regarding Crocs' business, operations, management and the intrinsic value of Crocs securities..."

According to the lawsuit, those difficulties cost the company $30 million in sales during the third quarter. Plaintiffs allege that shareholders were not told until after the end of the third quarter about amassed inventory due to cooler fall weather. Furthermore, they argue that several executives and directors sold at least $58 million in stock before the share price dropped.

Shares in Crocs fell by $27 to $47.74 on November 1, after the company announced that revenue for the third quarter fell short of the predicted $258.4 million. Prior to the announcement, the company's CEO, Ronald Snyder, and its co-founder, George B. Beodecker Jr. each sold over $100 million worth of shares. Other executives also sold their shares.


READ MORE LEGAL NEWS
Among the information that Crocs is alleged to have hidden from investors is the following:

According to the lawsuit, Crocs, "lacked a reasonable basis for the positive statements about the company, its earnings and prospects."

Crocs and its subsidiaries design, develop and manufacture footwear for men, women and children made from a specialty resin called "Croslite." The shoes are described as being "soft, comfortable, lightweight, superior-gripping, non-marking and odor-resistant." The company is based in Niwot, Colorado.

If you have suffered losses in this Crocs Inc. secruities loss, please contact a [Crocs Inc. Securities Lawyer] who will review your case at no cost or obligation.
Request Legal Help Now