Members of the Michigan Muslim community have launched a lawsuit arguing that the travel restrictions imposed on citizens from seven countries with Muslim majorities is unconstitutional. The complaint, filed in Virginia in Federal Court, argues President Trump’s Executive Order titled “Protecting the Nation from Terrorist Attacks by Foreign Nationals” will have dire consequences for them as individuals and stigmatize them for years to come. 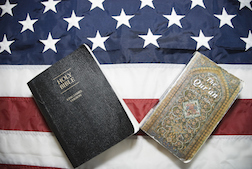 The defendants named in the lawsuit are Donald J. Trump, Homeland Security Secretary John Kelly, along with the US Department of State and the US Director of Intelligence.

The group of 29 Muslims, now living in the US, includes students, ordinary individuals, professionals, community leaders and one imam. The complaint asks for injunctive relief, legal costs and whatever compensation the court deems appropriate.

The complaint refers to President Trump’s executive order as the “Muslim Exclusion Order” even though the word Muslim is not used in the order.

“This order doesn’t apply to all Muslims,” says Akeel, “but it applies only to Muslims.”

“For each one of the plaintiffs there is a specific concern,” says Akeel.

Although the media focus has been on people trying to enter the country the complaint argues the order could have serious consequences for Muslims already in the US on a visa. If they are unable to renew those visas they might be expelled from the country.

According to the complaint, “The result of the order will mean many Muslims, lawfully in the United States, that are targeted by the Muslim Exclusion Order, including some of the John Doe and John Doe Plaintiffs, will be forced – as a result of the Muslim Exclusion Order – to return to their home countries, where they will likely face persecution, torture and even execution, simply because they are Muslim.”

The complaint argues there is also a lesser known purpose to the executive order. That lesser known purpose, the complaint says is “to initiate the mass expulsion of immigrant and non-immigrant Muslims lawfully residing in the United States by denying them the ability to renew their lawful status or receive immigration benefits afforded to them under the Immigration and Nationality Act of 1965 (“INA”) – based solely on their religious beliefs.”

“We have a student visa person who is in a four-year-program at a university. He can’t leave the country and be sure he can come back because of his Muslim faith. He risks being in a situation where he is unable to return to his studies if he leaves the country for any reason,” says Akeel.

“We have another client, a Syrian, who is seeking refugee status who is also in jeopardy. He is trying to escape from the risk of torture and death. Because he is a Muslim he will not be able to seek refugee status. What will happen if he has to return to his country of origin?”

Another plaintiff is a Muslim Syrian doctor currently working in a location that is short of physicians. Another is an award winning Syrian documentary maker and former member of the FBI Multi-Cultural Advisory Committee and the Kentucky Commission on Human Rights. Many are students in the US on student visas.


READ MORE CIVIL/HUMAN RIGHTS LEGAL NEWS
The so-called “Muslim Ban” is an executive order officially titled “Protecting the Nation from Terrorist Attacks by Foreign Nationals” that has created a state of chaos for thousands of people in the US and around the world. Legal objections are being filed in courts across the US with many observers predicting the legality of the order will likely be adjudicated by the Supreme Court at some point in the future.

“Today it's Muslims that are targeted for exclusion, tomorrow it could be someone else,” says Akeel.

“Once you open the door and say that you will accept a presidential edict that gives preference one religion over another and you allow it to become a precedent it is dangerous. Today it is Muslims, tomorrow it could be Protestants, Sikhs, Hindus, Jews or Catholics because you have allowed this to happen,” says Akeel.
“Losing cannot be an option,” Akeel says.

If you or a loved one have suffered losses in this case, please click the link below and your complaint will be sent to an immigration lawyer who may evaluate your claim at no cost or obligation.
Request Legal Help Now