The temptation to use hair dye to trim a few years off of your appearance is universal. So, in the fall of 2013, a Canadian man from Ottawa, Ontario, purchased and began using a well-known Just For Men hair dye product, marketed as Men H-45 Dark Brown Shampoo-in Haircolor. 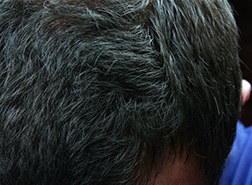 He used it four more times over the next two years, and then in the fall of 2015, while shampooing the product into his hair in the shower, he noticed something. He had developed small scabs all over his scalp. By the end of the week, the scabs had grown much larger, and within weeks, his whole head, including his temples, the back of his neck and behind his ears, had developed pustules, which were leaving fluid. The fluid was so intense that it was running down his back.

It got worse. He developed eczema all over his chest, abdomen and legs, and on December 28, 2015, he made a visit to the Medical Clinic at the University of Ottawa. Doctors said he was experiencing an extreme allergic reaction and was prescribed penicillin.

The problems continued and he eventually sought help from a local dermatologist who prescribed a topical steroid to control the allergic symptoms. Itchy, uncomfortable and embarrassed by the sores on his scalp and around his ears and neck, he stayed home from work for two weeks.

He connected his reaction to Men H-45 Dark Brown Shampoo-in Haircolor to the color-changing chemical in the product known as Para-Phenylenediamine (PPD). PPD is a chemical coal-tar dye that, when combined with an oxidizing agent, such as hydrogen peroxide, causes “colorant molecules” that change the hair’s color appearance.

In 2006, the medical journal Dermatitis (2006;17(2):53-55) named PPD as the “contact allergen” of the year. In 2011, the finding was confirmed in another study published in Dermatitis (2011 Nov-Dec;22(6):332-4). It reported that the PPD is “an important allergen; 5.0% of patients tested positive to PPD” when the patch was tested at the Ottawa Patch Test Clinic. The authors identified “hair dyes as the main source of exposure.”

The man stopped using the H-45 Dark Brown Shampoo but still suffers from dry, itchy skin, and believes that the Just For Men Haircolor product he used, manufactured by Combe Inc. in the United States, is responsible for his allergic reaction. He is now the lead plaintiff in a class-action lawsuit filed in the Ontario Superior Court of Justice. He is represented by attorney Jeff Orenstein, from the Consumer Law Group in Canada.


“I have had over 100 clients contact me about this,” says Orenstein.
“They have burns, scarring and other serious skin reactions. There is a very bad warning on the package telling people to test it on their skin; the warning is not good enough. The problem is particularly bad for men with dark skin, including blacks, Asians, anyone with dark skin.”

The statement of claim alleges “even if (Just For Men) is used as directed, the Defendants failed to adequately warn against the negative effects and risks associated with the product including, but not necessarily limited to, long-term usage,” writes Orenstein.

Orenstein’s filed claim goes on to allege that the test patch instructions included on the package are inadequate and may provide misleading or false results.

For its part, Combe Inc., in response to questions from LAS, says the lawsuit has “no merit” and “Combe Inc. will vigorously fight these allegations.” It went on to say “that hair color products contain certain dyes to which a small segment of the population may be allergic, although reactions are rare. It is important that consumers follow directions carefully when using any hair color product. Just For Men hair color products fully comply with legal and safety requirements, including the ingredients used, and the directions, labels and warnings that are included with the hair color products.”

If you or a loved one have suffered losses in this case, please click the link below and your complaint will be sent to a defective products lawyer who may evaluate your defective prpducts claim at no cost or obligation.
Request Legal Help Now

Posted by
kenneth berry
on August 8, 2019
I am a professional hairstylist and have been using just for men on myself and clients. i have developed dermititis, psoriasis, itchy beard and scalp.
Posted by
Scott Schultz
on June 23, 2016
I tried it twice. First time, I got the water blisters and scabs. I was sure that I did it wrong, and tried again. Same problem but only a small reaction to this product. I stopped using it and decided this dying my hair is not worth the pain and discomfort.
Posted by
jonathon Yinger
on June 22, 2016
Their beard product "for men only" really irritated my face, but it didn't happen until after months of use. This led be to believe that things were fine...
Posted by
Dale Chester
on June 20, 2016
I use this type of hair dye and have had scabs on my scalp but had no idea that this was the cause...I have used this type of hair dye since about the year 2000 I guess.....And just within the last year or two stopped using it do to my having some hair loss...which I felt was caused by this product....When I stopped using it I notice the hair loos also stopped....