Simcha Berman was enjoying a belated honeymoon trip with his bride Sarah in Rhode Island in 2000 when a tragic accident occurred on the famed Cliff Walk. The accident turned Berman into a quadriplegic, cost him his marriage and left his life in ruins. 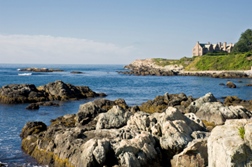 According to the 7/14/10 edition of the Providence Journal-Bulletin, the Bermans were touring the Breakers on August 17, 2000. On the recommendation of a tour guide, strolled the 3.5 mile Cliff Walk, the famed walkway above the eastern oceanfront in Rhode Island. Upon reaching the paved walkway, the Bermans noted what appeared to be a beaten path that they assumed would take them closer to the water.

Simcha went first, stepping onto the ground. However, before he could reach for his wife's hand, the ground gave out beneath him and he tumbled 29 feet to the rocks below.

Berman, now divorced, filed a quadriplegia lawsuit against the City of Newport and the State of Rhode Island. The plaintiff's trial has yet to begin, but Berman recently got past a roadblock when the state Supreme Court denied a motion by the City of Newport to re-argue the case. While the need for additional discovery will delay the case further, the lawsuit has been given the legal green light to proceed to trial.

At issue is the Recreational Use Statute, a law enacted in 1978 that encourages landowners in Rhode Island to make their lands free and open to the public for recreational use, without liability for the public beyond the refrainment from willful or wanton conduct.

However, various exceptions to immunity have come into play over the years, at the behest of the Supreme Court, affecting the limitations to the willful or malicious conduct immunity granted by the statute.

In Berman's case, Justice Maureen McKenna Goldberg noted there is evidence that the City of Newport—one of the defendants in the case—had known for some time about the dangers of the Cliff Walk, including an eroding cliff edge and drainage defects which are often mistaken as footpaths. Justice Goldberg made the point that the defendant was aware of the draw of the water for visitors, who might mistake the erosion trails as footpaths to the water.

Justice Goldberg noted that the defendant had failed to guard against the dangers or to post warnings even in the face of several fatal or near-fatal accidents. According to the record, it did not appear that Berman's accident happened simply because he ventured too close to the cliff edge and fell.

In the justice's view, the events leading to the plaintiff's tragic injury were caused by latent defects in the structure of the Cliff Walk not obvious to the occasional visitor, as is alleged in the quadriplegia lawsuit.

If you have suffered losses in this case, please send your complaint to a lawyer who will review your possible [**** Lawsuit] at no cost or obligation.
Request Legal Help Now