In what could be the largest lawsuit award for false advertising ever, the Sugar Association is asking for $1 billion in damages, from Splenda makers McNeil, PPC, Inc. and McNeil Nutritionals, LLC.

According to Saturday's edition (November 17, 2007) of the Los Angeles Daily News, Sugar Association officials take issue with the marketing slogan "Made from sugar, so it tastes like sugar," and "Good for the whole family,"

McNeil-PPC, Inc. is a unit of Johnson & Johnson Inc. 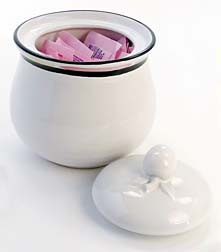 In the lawsuit, the Sugar Association claims that sucralose, the sweetening ingredient in Splenda, is a man-made chlorocarbon and that a complex process is required to first convert sucrose (sugar) into a number of different intermediary chemicals before using "phosgene gas - a deadly weapon used during World War II - as the chlorinating agent to yield sucralose."

The Sugar Association also alleges that despite rulings in France, Australia and New Zealand that have found Johnson & Johnson's advertising of Splenda to be deceptive, Johnson & Johnson continued advertising causing consumers to believe that Splenda was not an artificial product.

According to CSPI Executive Director Michael F. Jacobson, "the sucralose in Splenda is, in fact, a synthetic chemical that contains chlorine, something that no natural sugar contains".(4) He added, ""Made from sugar," certainly sounds better than, say, "made from chlorinated hydrocarbons," or "made in a laboratory," or "fresh from the factory." Splenda's artificiality may present a marketing challenge, but that's not an excuse to confuse consumers and lead them to believe that Splenda is natural or in any way related to sugar. I hope that McNeil starts marketing Splenda honestly.

Johnson & Johnson denies misleading anyone(1) and have filed a counter-lawsuit seeking to stop the Sugar Association from making alleged false and misleading claims about Splenda.

According to McNeil-PPC, Inc., "Sucralose is manufactured using a patented multi-step process in which 3 hydrogen-oxygen groups on the sugar (sucrose) molecule are selectively replaced with 3 chlorine atoms. Because it is made from sugar, sucralose (SPLENDA® Brand Sweetener) tastes like sugar".

Sucralose is 600 times sweeter than sugar on average and has no calories. Although sucralose is made from table sugar, it adds no calories because it is not digested in the body. Sucralose is sold under the brand name Splenda. After reviewing more than 110 animal and human studies, the FDA approved sucralose in 1998 for use in 15 food categories, including as a tabletop sweetener and for use in products such as beverages, chewing gum, frozen desserts, fruit juices, and gelatins. In 1999, the FDA allowed sucralose as a generalpurpose sweetener in all foods. Source: FDA Consumer July/August 2006.

What phosgene is:
• Phosgene is a major industrial chemical used to make plastics and pesticides.
• At room temperature (70°F), phosgene is a poisonous gas.
• With cooling and pressure, phosgene gas can be converted into a liquid so that it can be shipped and stored. When liquid phosgene is released, it quickly turns into a gas that stays close to the ground and spreads rapidly.
• Phosgene itself is nonflammable (not easily ignited and burned).

Where phosgene is found and how it is used:
• Phosgene was used extensively during World War I as a choking (pulmonary) agent. Among the chemicals used in the war, phosgene was responsible for the large majority of deaths.
• Phosgene is not found naturally in the environment.
• Phosgene is used in industry to produce many other chemicals such as pesticides.
• Phosgene can be formed when chlorinated hydrocarbon compounds are exposed to high temperatures. Chlorinated hydrocarbon compounds are substances sometimes used or created in industry that contain the elements chlorine, hydrogen, and carbon.
• The vapors of chlorinated solvents exposed to high temperatures have been known to produce phosgene. Chlorinated solvents are chlorine-containing chemicals that are typically used in industrial processes to dissolve or clean other materials, such as in paint stripping, metal cleaning, and dry cleaning.

If you or a loved one has been harmed by this product, please contact a lawyer involved in a possible [Splenda Lawsuit] who will review your case at no cost or obligation.
Request Legal Help Now

Posted by
goldie
on April 11, 2018
I have been 2 every dr. where I live and taking every med ointiment and creams 4 my sores on my body 4 five years and dr didn't know what was going on and I was on Splenda 4 five years and that s started after I went on Splenda and didn't know what was causing my break out of sores but now I know it was because I will tell u later what I did. ill tell u I quit taking Splenda and my sores are healing up slowly but healing.
Posted by
Wanda fears
on December 9, 2012
I have Addison's disease which turned to diabetes,
So I picked up a package of cookies
Called sugar free fudge striped shortbread
Cookies, made with Splenda. These cookies made
Me dehydrated and extremely weak and can't stop
Running to the bathroom. Please, we public need
Some kind of warning about these products
I have drank 4 bottles of water in a 24 hour
Period and still not back to normal