If You Buy Online - Read This

A small but significant court case is shedding light on the issue of consumer rights in the burgeoning world of online sales and, secondly, bringing TransUnion’s “credit score” marketing and sales strategy into question. 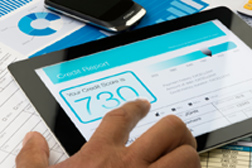 Gary Sgouros, a diligent consumer who wanted to see what was on his credit report, claims in a class-action lawsuit that he, and others, were cheated by TransUnion in terms of the product they were sold, and then suckered into agreeing to the company’s standard arbitration clause that preempts their right to sue if they found the TransUnion product to be unsatisfactory.

By law every American has the right to obtain a free “credit report” from TransUnion, Experian or Equifax. TransUnion offered Sgouros and others a more complete reading of their credit when they purchased a $39.99 “credit score” from them.

“They are selling a product that does not have any real value,” says F. Paul Bland, an attorney and Executive Director of Public Justice, a consumer and justice advocacy organization in Washington, D.C. “The credit score they are selling you is not used by anyone. It’s your Fair Isaac or FICO score that determines whether you pay more for your mortgage or a car loan. The TransUnion score is something they made up. It is not a meaningful gage.”

The Fair Credit Reporting Act was amended several years ago making it possible for everyone to get a free credit report. What TransUnion has done, according to Bland, is find a way to monetize the request. “If you want to get your credit report from TransUnion or Equifax or Experian, you can get that for free if you go to the right place,” adds Bland.

LawyersandSettlements reached out to TransUnion for comment but received no reply.

Almost every online retailer, merchant and service provider requires that dissatisfied consumers submit to arbitration. (If they don’t click “I agree,” the transaction doesn’t proceed.) The arbitration process Bland says is often secretive, run by corporate defense lawyers and heavily weighted against the consumer.

Having said that, even the Supreme Court has repeatedly upheld and expressed confidence in the arbitration process. However, increasingly, when there is evidence that the consumer was “muddled” by the arbitration clause, courts rule in favor of the consumer.

After pouring over the TransUnion website, U.S. District Court Judge James Zagel ruled that, indeed, the website design led consumers to believe that they were agreeing to have their credit records checked when, in fact, consumers were agreeing to have complaints dealt with through arbitration. They were, in essence, clicking away their rights without being aware of what that click meant.

“I think Judge Zagel is right,” notes Bland.
“However, this is far from death for arbitration clauses. This just says if you are going to force people into arbitration you can’t confuse them, or muddle them; you can’t hide the ball.”

Now that Judge Zagel has tossed out TransUnion’s bid to have the case settled by arbitration, it seems more likely that Sgouros’s class action will have its day in court.

“In this case TransUnion did a terrible job of setting up the clause,” says Bland. “So I don’t think they are going to be able to walk away from the consumer protection laws.”

The Consumer Financial Protection Bureau was asked to review the “arbitration clauses” related to financial lending institutions. The bureau has been reviewing these clauses for years now and it is widely expected that it will have something to say soon. It is possible that when it comes to lending institutions, the “arbitration clause” that pre-empts a consumer’s right to seek redress in courts may go away.

It will still apply in most other situations, but when it comes to lenders, there may be a change.

Posted by
Felix Baker
on May 16, 2016
its BAD when you work all your life paying bills to companies like Comcast ,Entergy and other Companies and its never reported on your TransUnion ,Experian, Equifax Credit Report . These Companies give [ Credit History report ] So what happen to the Whole credit History . It only reports [ SOME OTHER COMPANIES BAD REPORTS ,COMPANIES THAT LIED TO GET PAID TWO TIMES AND COMPANIES THAT THE GOVERNMENT PAID LIKE DOCTORS AND OTHER SERVICES .
Posted by
M. Gray
on March 12, 2016
Add my voice to the chorus of people misled by the "$1 Credit Score", and then discovered automatic drafts for a monthly subscription to which I NEVER agreed. I called immediately and they reversed the charge, and said my subscription was cancelled. Then they proceeded to continue the drafts the very next month. Their automated phone directory is a labyrinth of options, seemingly, none of which lead to an option to speak with a person. When I finally get through, it's just like all the other corporate THIEVES like telecoms, banks, other organizations that help themselves to your money: I tell the story to five or six different people who then transfer me to the next.
There seems no way to hold these vermin accountable, and who is to blame? The very people who are supposed to protect us from these shenanigans.
Posted by
Scott
on November 2, 2015
I came across this article because I was working on suing Transunion for FCRA violations. I guess I'll add state consumer protection claims.

It's become standard business practice in the USA to make billions ripping off consumers and then force arbitration or settle to paralyze developing case law that could be advantageous for everyone getting ripped off.

Posted by
Mary J Miller
on October 1, 2015
Transunion mislead me a few years ago, I believe it was on credit card for 6 months, I will have to check my records to make sure.
Posted by
Ke
on June 10, 2015
I recently notice that there is about $17/ month on my credit card bill. I originally was attracted by Transunion's $1 credit score check. I could not think of where I see that there are additional charges. I found online that many people like me fall for this type misleading charges. What Can I do about this? Please help
Posted by
Levius Toussaint
on March 1, 2015
Transunion misleading me for last 10 years paid 39.00 I would like to be a part of the lawsuit class action because I'm a victim.