This is the story of a drug company, like most other drug companies, that appears to put the profits ahead of the people. At least, that's the accusation coming from a dear, old 72-year-old grandmother who is serving as the lead plaintiff for a potential class-action lawsuit against the makers of Vytorin.

You can't really blame Marion J. Greene. She's a grandmother, after all, and at 72 is as frugal as the day is long. Like most 72-year-old grandmothers who have known hard times and tight budgets, and who appreciate the value of a dollar. 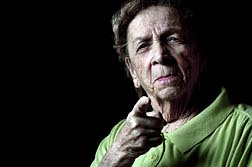 And so Marion was rightly annoyed to learn that she had been paying through the nose for what she thought was a superior product.

"I was shocked to see that I was using a drug costing three times what a generic would, with no additional benefits," said Mrs. Greene. "I feel I've been intentionally misled by companies whose main pursuit is profits, rather than health."

Merck has the task of manufacturing and marketing the merged drugs, known as Vytorin.

Statins appear to be proven winners on their own, while the jury is still out as to the effectiveness of Zetia as a stand-alone. Thus, when the patent on Zocor was about to expire, Vytorin was born in an effort to keep Zocor somewhat proprietary.

But then came the ENHANCE study, which was to have verified the effectiveness of Vytorin (and to a lesser extent Zetia on its own) as a cholesterol-buster. The study was completed in April 2006, but not released until 21 months later—and only after Congress got in a huff and demanded that Merck and Schering-Plough get off their duffs and release the bloody thing.

What were they trying to hide?

According to the study, about which the manufacturers would have most assuredly been well versed, Vytorin was shown to provide little, if any significant benefit in slowing the clogging of arteries when compared with generic, and far less-expensive statins.

Meantime, while the study data was clogging the communication channels, the advertising channels seemed to be working overtime. Vytorin—"the only drug that helps: block the absorption of cholesterol that comes from food," and "reduces the cholesterol your body makes naturally."

The result? "Less bad cholesterol...in your bloodstream." Thus, a drug that was marketed as the Holy Grail of Cholesterol is shown to do little, and certainly no more than the lowly statin, while commanding three times the price.

It's enough to make frugal, little old grandmothers see red over the green they were losing at the pharmacy counter. Imagine paying $100 for about 30 pills. That's what staffers with the office of Democratic US Senator Chuck Schumer found after polling pharmacies in cities throughout New York State. Mind you, it's mostly Medicare and Medicaid on the hook for the expensive drugs, and not little old grandmothers directly, but still—it's the principle of the thing.

Value. At $100 for 30 pills...well, land sakes these pills better be good for that kind of money. And heavens to betsy, the nice man on the commercials says they are...

But they're not? Well, never get on the bad side of an angry grandmother. And those commercials could very well be false advertising.

It has been reported that they were pulled from the airwaves January 22nd. Andrew Cuomo, the Attorney General for New York, is investigating to see whether or not the Vytorin marketing campaign was in violation of the State's false advertising statutes.

Meantime, it was revealed last week that Medco Health Solutions has seen a drop in Vytorin sales. Vytorin started the year at 11.7 per cent of total cholesterol meds dispensed through Medco. By mid-February, that share had dropped to 9.7 per cent. The Medco retail numbers were just as alarming, with a corresponding drop from 11.5 to 8.1 for Vytorin, and a fall to 5.4 from 8.4 for Zetia.

At the same time, sales and prescriptions for cheaper, generic statins have jumped.

And everywhere, grandmothers are smiling.