The largest study of its kind to show an association between atypical antipsychotics such as Zyprexa, and rapid weight gain and metabolic changes that can lead to diabetes and hypertension was published Wednesday in the Journal of the American Medical Association (JAMA). The study was conducted in 272 children aged between 4 and 19 years. 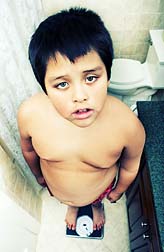 Of the four atypical antipsychotics, Zyprexa caused the most weight gain over the course of the study – at nearly 19 lbs, a 15 percent increase. Importantly, Zyprexa was also found to significantly raise cholesterol, insulin, triglycerides and blood sugar levels, all of which can lead to the development of diabetes and heart disease.

Children taking Abilify, Risperdal, and Seroquel gained an average of between 10 and 13 pounds over the 11 weeks, and the drugs' impact on metabolic disease indicators varied.

In an article published in the Wall Street Journal (wsj.com), Christoph Correll, the study's lead author and a psychiatrist and scientist at the Feinstein Institute for Medical Research in Manhasset, NY, said, "The weight gain is much larger than we thought. It's massive, and it's the medication that caused it."

Posted by
stephanie
on March 15, 2015
those drugs cause weight gain in adults too; leading to diabetes and other overweight issues.
Posted by
Joe Damajo
on June 19, 2013
One of my sons had autism. He couldn't behave himself, kept having issues with his temper, damaged our house and our furniture, and didn't have any friends. So I took him to the doctor one day, and the doctor prescribed risperdal for my autistic son. I went to the pharmacy and picked up the medication, went home and told my son to take the medication. He cooperated by taking his pills twice a day. When he was 11, the weight gain wasn't that obvious. By age 16, he had low self esteem because all the other guys were calling him fat. He never was able to get a relationship with any girls because they didn't like to date someone that was obese. My son was 5 feet and 9 inches and weighed 320 pounds. Eventually, my son had a heart attack and became unconscious. He later died that day at the hospital.

Don't resort to drugs to treat psychological problems in your children. You are slowly killing them!