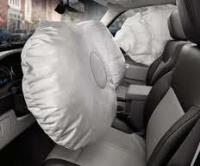 Detroit, MI: Seven of the major automotive manufacturers are issuing recalls for faulty airbags in the US. The National Highway Traffic Safety Administration (NHTSA) has said that BMW, Chrysler, Ford, Honda, Mazda, Nissan and Toyota will recall cars sold in places where hot, humid weather can potentially affect the air bags. The automakers all have air bag systems made by Takata Corp., a Tokyo-based supplier of seat belts, air bags, steering wheels and other auto parts.
The older-model cars have air bag inflators that can rupture. If that happens, the air bags might not work properly in a crash, and shards from the broken system could fly out and cause injury, the Associated Press reports.

"Based on the limited data available at this time, NHTSA supports efforts by automakers to address the immediate risk in areas that have consistently hot, humid conditions over extended periods of time," the agency said in a statement.

The NHTSA has reportedly opened an investigation this month after receiving six reports of air bags rupturing in Florida and Puerto Rico. Three people were injured in those cases. It had estimated 1.1 million vehicles automakers in the U.S. could be affected, but the total is likely to climb.

The following automakers and vehicles will be included in the recall, according to letters sent to NHTSA by the various automakers: (Associated Press

Chrysler: Chrysler is still determining which vehicles are affected.

Nissan: Nissan said it is still determining which vehicles are affected.

Toyota: Toyota has twice recalled vehicles for problems with Takata air bags. The company says it will recall certain 2003-2005 Corolla, Matrix, Sequoia, Tundra, Lexus LC and Pontiac Vibe cars not covered in the previous recalls, to repair their passenger-side air bag inflators. It has yet to set an owner notification schedule.

Posted by
Charles Atwell
on February 4, 2018
Yeah my name is Charles Atwell and I own several cars and in the past including a 2005 Volkswagen Jetta diesel Chrysler Town and Country van 2004 which I currently Drive Ford Crown Victoria 2004 I've had several cars that I think would be included in this lawsuit I still on my Town & Country Chrysler and I'd like to be in cluded and this lawsuit for I fear every time I drive my car is this airbag when it go off so very fearful thing for me and although I've never had any accidents I just fear that it's just going to inflate automatically
Posted by
casey quigley
on May 21, 2017
my toyota corolla 2003 air bags were recalled and fixed then two days ago im getting on the freeway and they deploy breaking the wind shield and burning my arm i was lucky to survive and thank god my kids were not in the car anyone know what i should do or who to call for legal help in hawaii?
Posted by
Tenessa
on March 19, 2017
2003 airbag recall. Ford windstar
Posted by
Jacquelene Williams
on March 17, 2017
Anyone had airbag and seatbelt trouble with their 2013 kia sorento, please let me know.
Posted by
Chaviva Witness
on May 18, 2016
Please let me know if we had to have been in an accident to participate in the class suit on any defects and/or recalls. I have the 2007 Nissan Murano.
Posted by
Thomas
on December 28, 2015
I have tried to buy a new car and can't because of this airbag recall.
I'm expected to swallow $7000 on a trade in because of this recall.
The dealer can't resell my trade in because of this recall,and the new part isn't available.
The fee for the dealer if they sell the car with this recall is $7000,and THREE dealers expect me to take a $7000 loss on my trade (3 FORD DEALERS ) 3 FORD DEALERS DON'T WANT THE CAR )
So I'm stuck with a unsafe car. I'm pissed.

Posted by
herb herman
on December 19, 2015
Honda dealer replaced driver airbag parts but no notification or replacement of passenger side.2005 Pilot ex. Should it have been replaced?