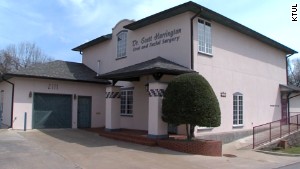 Tulsa, OK: Tulsa-based dentist, Dr. Scott Harrington, is facing a malpractice class action lawsuit brought by patients who allege the dentist exposed them to various blood-borne pathogens, specifically hepatitis B and HIV.
The lawsuit was filed by seven plaintiffs, five of whom have contracted infectious diseases during treatment at his dental clinics. Among them is an unnamed couple, with the wife alleging she went in to have a wisdom tooth pulled at Harrington' Midtown office.

Nearly 7,000 patients who were treated at Harrington's clinic in suburban Tulsa may have been exposed to HIV and hepatitis, according to health investigators. A state investigation began after the health department alerted the dentistry board to a potential hepatitis C infection from Dr. Harrington 's office.

According to a report by KJRH.com the Oklahoma State Department of Health reports 77 of the dentist's former patients have tested positive for hepatitis C, five for hepatitis B and four for HIV.

In March,CNN reported that conditions at Harrington' dental practice left investigators nearly speechless. "I will tell you that when ... we left, we were just physically kind of sick," Susan Rogers, executive director of the Oklahoma Board of Dentistry told CNN.com. "I mean, that's how bad (it was), and I've seen a lot of bad stuff over the years.

The Oklahoma Board of Dentistry launched an investigation in March 2013 after one of Harrington's patients tested positive for hepatitis C.

Consequently, on Tuesday, September 3, 2013, the class action lawsuit was filed, naming Harrington, his corporation and several pharmaceutical companies as defendants. Court documents show that the plaintiffs were exposed to infectious pathogens through the repeated use of Propofol vials. Propofal is an anesthetic used in surgical procedures.

The lawsuit contends that the pharmaceutical companies continued to manufacturer, market and sell multi-use propofal vials, despite being informed that the anesthesia personnel were reusing the vials, and those vials could therefore be contaminated and expose patients to infectious disease.

Specifically, the lawsuit states that the makers, distributors and marketers of the vials, Hospira, Pharmaceutical Systems, and Southern Anesthesia were "willful, reckless, malicious and in total disregard to health and safety of the patients."

The malpractice suit alleges negligence on the part of Harrington, his practice and medical staff and that the drug makers are liable due to the defective multi-use vials.