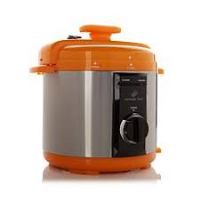 Santa Clara, CA: A defective products class action lawsuit has been filed against Wolfgang Puck Worldwide, Inc, alleging second and third degree burns caused by defective design of the pressure cooker.
Filed by a plaintiff Tabitha W., in Texas, the lawsuit claims she suffered steam and liquid burns resulting from the Wolfgang Puck 7 Quart 4-in-1 Pressure Cooker, which she bought through the Home Shopping Network.

The complaint asserts that the plaintiff followed directions for the use of the Wolfgang Puck pressure cooker, which state that once the device had beeped at the end of its soup cycle, telling her that her soup was finished, she should unplug the device and vent the pressure cooker, allowing steam to escape. This is meant to reduce the pressure inside the cooker.

The plaintiff states that after waiting approximately twenty minutes, she opened the lid to the cooker and the gumbo exploded from the pressure cooker and splashed onto her exposed body. She alleges the liquid was boiling hot and that immediately the juices and steam from the gumbo contacted her skin, she suffered second and third degree burns.

According to the complaint, the liquid inside the pressure cooker was so hot that her oven door was shattered during the incident. The plaintiff was rushed to hospital where she received treatment for burns on her chest, breasts, stomach, arm, leg and foot.

Posted by
Ruby lake
on November 5, 2019
My pressure oven timer stoped working then few days later no heat. Very disappointed in Wolfgang and HSN
I have many Wolfgang products and pots and pans, this is the first disappointment and last purchase. I've had my oven for about 1 1/2 yr but only used it about 15 times I'm 74 and been in hospital most of the year.