Were you looking for Fen-Phen or PPH and Fen-Phen lawsuits?
December 27 2003

The diet drug Adipex (generic name: phentermine) is a stimulant similar to an amphetamine, an anorectic drug used to stimulate the central nervous system (nerves and brain). Adipex increases heart rate and blood pressure while decreasing appetite. It is a short-term (a few weeks) appetite suppressant that is generally prescribed to obese individuals who are at increased health risk because of their weight. However, studies have shown that taking Adipex together with other diet drugs (e.g. Phen-Fen or Redux) can cause heart damage and lung problems, including primary pulmonary hypertension or PPH, which is a fatal lung disorder.

Other side effects from Adipex, similar to Fen-Phen side effects, may include tachycardia or abnormal heart beat, high blood pressure, dizziness, insomnia, and psychotic episodes. 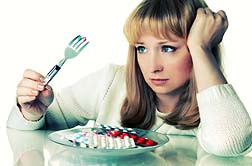 Adipex, manufactured by GATE Pharmaceuticals to treat obesity, can also be habit-forming and should be used only by the person it was prescribed for; it can make you physically and psychologically dependant and cases of abuse have been reported.

Phentermine, the generic name for Adipex, is the most commonly prescribed appetite suppressant, mainly because it costs less than other FDA-approved diet pills. The FDA recommends short term use of Phentermine—meaning less than 12 weeks—along with a diet and exercise plan.

If you have the following conditions, you may not be able to take Adipex: You should also consult a doctor before taking Adipex if you are pregnant. As well, this medication should not be given to someone younger than 16 years old without a doctor's consent.

Primary Pulmonary Hypertension ("PPH") is a serious and potentially life threatening cardiovascular condition. In a study published in the New England Journal of Medicine in 1996, it found that the use of Fen Phen for three months or longer can increase in the risk of developing PPH by a factor of 23. PPH causes high blood pressure in the lungs that can create a feeling of breathlessness with minimal exertion, fatigue, dizzy spells, fainting and chest pain.

If you have suffered these side effects or other adverse side effects from the use of Adipex, you may qualify for damages or remedies that might be awarded in a possible class action against Adipex, please fill in our form on the right to submit your complaint.
Stay Informed
Get the latest on class action lawsuits, settlements & more! Subscribe to our free weekly newsletter.
Get our Newsletter!
Submit a New Complaint
Been wronged by a similar product or service?
Click here to send us your complaint.