If you used an American Express Company ("Amex") Blue Cash credit card between September 2003 and December 2006 you may have a claim for failure to receive the full rebate promised by Amex. There is currently a putative class action against Amex addressing the rights of Amex Blue Cash Cardholders pending. In addition, the attorneys for plaintiff in that action recently obtained a very significant decision before the U.S. Court of Appeals for the Third Circuit furthering the rights of consumers to seek redress for wrongful practices. The decision allows the case to go forward as a class action without requiring the plaintiff to engage in the sole remedy of arbitration which Amex had claimed the plaintiff was contractually obligated to do. 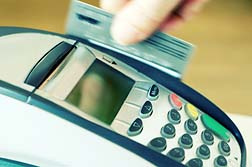 The lawsuit claims that Amex marketed the Blue Cash credit card by telling cardholders that they would be rewarded for their spending by receiving a cash rebate" and would earn up to 5% Cash Back. Amex also represented that, if the consumer spent between $6001 and $50,000, the consumer would potentially receive up to 4.5% of the amount of their purchases back as a rebate. However, because of the manner in which Amex calculated the "cash back" rewards and rebates, the Blue Cash cardholders received far less than Amex promised.

If you obtained and used an Amex Blue Cash card, you may have been a victim of this misleading practice. Click below for a free evaluation of your potential claim as either a plaintiff or member of a class in a class action suit.

If you or a loved one has suffered damages in this case, please fill in our form on the right and your complaint will be sent to a lawyer who may evaluate your claim at no cost or obligation.
Stay Informed
Get the latest on class action lawsuits, settlements & more! Subscribe to our free weekly newsletter.
Get our Newsletter!
Submit a New Complaint
Been wronged by a similar product or service?
Click here to send us your complaint.
RELATED NEWS
More American Express Blue Card News