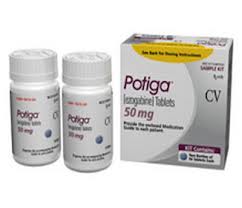 The Food and Drug Administration (FDA) has issued a public warning regarding the anti-seizure medication Potiga (Ezogabine), stating that it can cause blue skin discoloration and eye abnormalities characterized by pigment changes in the retina. The FDA does not currently know if these changes are reversible.
Potiga is approved as adjunctive (added on to other anti-seizure medications) treatment of partial-onset seizures in adult patients 18 years and older.