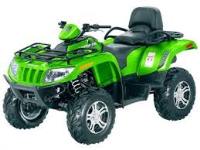 Los Angeles, CA: Arctic Cat is recalling about 40,000 Single-Rider and 2UP All-Terrain Vehicles (ATVs) following reports of crashes and injuries. The alleged defect involves components in the front gear case which can fail, posing a risk of loss of control and crash hazard.
Arctic Cat has received 44 reports of components in the front gear case failing, including 10 reports of the vehicle stopping abruptly or the operator losing of control of the ATV. Arctic Cat has received four reports of injury, including one incident involving a consumer sustaining broken ribs and injuries to a knee and a back.

The recall involves model year 2008 and 2009 Arctic Cat single-rider and 2 UP style ATVs. Single-rider ATVs have one seat and one set of footrests for the operator. 2 UP ATVs have an elongated seat designed to hold one passenger behind the operator, a set of hand-holds mounted to the rear frame for the passenger and two sets of footrests. The recalled ATVs came in a variety of colors and have the name Arctic Cat on each side of the fuel tank and on the front above the grill opening.

All model year 2008 Arctic Cat ATVs with 400 cubic centimeter (cc) and larger engines are being recalled.