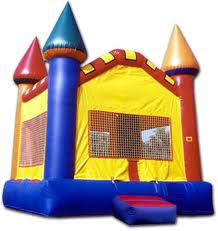 Chicago, IL: According to a recent study, as many as 30 children a day are injured in bounce houses at amusement parks, fairs and private homes. Most of these incidents involve children falling inside or out of the inflated houses, and collisions with other children.
"I was surprised by the number, especially by the rapid increase in the number of injuries," said lead author Dr. Gary Smith, director of the Center for Injury Research and Policy at Nationwide Children's Hospital in Columbus, Ohio, in an interview with the Associated Press.

The numbers Smith and colleagues analyzed are from national surveillance data on emergency room treatment for nonfatal injuries linked with bounce houses, maintained by the U.S. Consumer Product Safety Commission. Their study was published online Monday in the journal Pediatrics.

The numbers show a doubling since 2008, and a 15 fold increase overall, the authors reported, with the number of children aged 17 and younger who received treatment at an ER for bounce house injuries having risen from fewer than 1,000 in 1995 to nearly 11,000 in 2010.

The increase in injuries coincides with an increase in the popularity of bounce houses, as witnessed by their growing presence at amusement parks and even shopping centers. Over one third of the children injured are under the age of five.

While the study didn't look at fatalities, there are data from the product safety commission which show four deaths from bounce house injuries between 2003 and 2007, all involving children hitting their heads on hard surfaces.