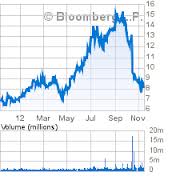 New York, NY: A securities class action lawsuit has been filed in the United States District Court for the Southern District of California on behalf of investors who purchased or acquired ISIS Pharmaceuticals, Inc. ("ISIS" or the "Company") (Nasdaq:ISIS) securities between March 29, 2012 and October 15, 2012, inclusive (the "Class Period"), alleging violations of the Securities Act of 1934 against the Company, certain of its officers and directors (the "Complaint").

The Complaint alleges that the Company conditioned investors to believe that Kynamro (mipomersen sodium), one of the drugs in its pipeline, would receive approval from the U.S. Food and Drug Administration ("FDA") through a host of materially false and misleading statements regarding the safety and efficacy of the drug, as well as reportedly positive results from Kynamro's phase three clinical trial. As a result of the foregoing, the Company's statements were materially false and misleading at all relevant times.

On October 16, 2012, two days prior to a meeting of the FDA'sEndocrinologic and Metabolic Drugs Advisory Committee to decide on whether to recommend Kynamro for FDA approval, the FDA published a clinical briefing document questioning the safety and efficacy of Kynamro. Specifically, the report noted that abnormal growths or neoplasms developed in 3.1% of patients treated with Kynamro, as compared to only 0.9% of patients who took a placebo. The FDA report concluded that this "imbalance in neoplasms will need to be assessed further in on-going and future studies and post-marketing (if approved)." In addition, the report found that three patients treated with Kynamro died during clinical testing. Two died of heart attacks and the other patient died of acute liver failure, and the report concluded that "the potential for a contributing effect of mipomersen cannot be ruled out."

If you have suffered from financial losses, you may qualify for damages or remedies that may be awarded in a possible ISIS Pharmaceuticals, Inc. securities class action lawsuit. Please fill in our form on the right to submit your complaint for a free evaluation.