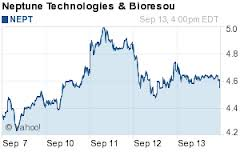 New York, NY: A securities class action lawsuit has been commenced in the United States District Court for the Southern District of New York on behalf of all persons or entities who purchased the common stock of Neptune Technologies & Bioressources Inc. ("Neptune"or the "Company") (Nasdaq:NEPT) between December 12, 2011 and November 8, 2012 (the "Class Period"). The proposed class action includes purchasers in Neptune' September 25, 2012 registered public stock offering priced at $4.10 per share.

The lawsuit charges Neptune and certain of its officers and directors with violations of the Securities Exchange Act of 1934. Neptune is a Quebec, Canada-based biotechnology company that develops and commercializes krill oil products extracted from Antarctic krill for the nutraceutical, pharmaceutical, cosmetic, and pet food markets.

The complaint alleges that, throughout the Class Period, defendants lauded the future benefits of the massive expansion underway at the Company' Sherbrooke production plant – the Company' sole production facility which housed all of its inventory. Specifically, the complaint alleges that, during the Class Period, defendants issued materially false and misleading statements regarding the Company' operational status and financial projections, and failed to disclose the following adverse facts: (a) the Company had installed larger acetone storage tanks at the Sherbrooke production plant that facilitated their storing dangerously high levels of acetone that exceeded those permitted by the certificate of authorization issued by the Québec Ministry of Environment in 2002; (b) the Company had failed to obtain permission from the Quebec government to commence expansion of the Sherbrooke production facility; (c) the Company had been chasing market share at the cost of margins and would see its profit margins collapse by the end of the Class Period; and (d) as a result, the Company was not on track to "maintain [its] operational performances, execute [its] growth strategy, [or to] continue delivering positive results."

The price of Neptune stock declined between November 8, 2012 before the close of trading, when an explosion and fire destroyed the Sherbrooke production facility, and November 26, 2012, when the Company' stock, which had been halted by the Nasdaq following the explosion, resumed trading and plunged $1.18 per share – approximately 32% of its closing price on November 7, 2012, the evening before the explosion – on extremely high volume of more than 3.8 million shares traded.

If you have suffered from financial losses, you may qualify for damages or remedies that may be awarded in a possible Neptune Technologies & Bioressources Inc, securities class action lawsuit. Please fill in our form on the right to submit your complaint for a free evaluation.