Pondimin (Fenfluramine hydrochloride), the "fen" in Fen Phen, is a prescription appetite suppressant approved by the FDA in 1973 for the short-term (a few weeks) management of obesity. Phentermine—the other half of Fen-Phen—was approved in 1959. According to the FDA, since the late 1990s, up to 20 percent of patients who took Redux, Fen Phen or Pondimin suffered heart damage, including heart valve disease and Primary pulmonary hypertension (PPH).

In 1997 the FDA asked the American Home Products, the maker of Fen-Phen, to withdraw the drug from the market after reports of heart valve disease and other Fen-Phen side effects. The agency recommended users to stop taking the drug and to consult with their physician about getting an echocardiogram.
Pondimin and Fen-Phen Lawsuits 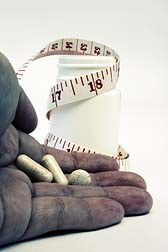 In 2000, the manufacturer agreed to settle a major class action lawsuit pending for about $12 billion. However, people who were later diagnosed with PPH have also filed lawsuits against Wyeth-Ayerst (that later bought American Home Products).

In 2004, a trial liability lawsuit against Wyeth over its diet drugs awarded three women from Utah $1.36 million in compensatory damages. The women claimed they suffered heart damage by taking drugs Pondimin and Redux, which make up half of the Fen-phen diet drug.

In July of 2004, a federal judge approved a revised legal settlement: the Wyeth agreement set up a new $1.275 billion fund for about 40,000 people who suffered non life-threatening valve damage from taking the appetite suppressant drugs. Since that time, primary pulmonary hypertension (PPH) - a rare and frequently fatal disease of the lungs - has been increasingly reported in patients receiving fenfluramine. Generally, PPH can develop several years after taking Fen-Phen.

Primary Pulmonary Hypertension ("PPH") is a serious and potentially life threatening cardiovascular condition: the 4-year survival rate has been reported to be 55 percent. In a study published in the New England Journal of Medicine in 1996, it found that the use of Fen Phen for three months or longer can increase in the risk of developing PPH by a factor of 23. PPH causes high blood pressure in the lungs that can create a feeling of breathlessness with minimal exertion, fatigue, dizzy spells, fainting and chest pain.

If you have suffered these side effects or other adverse side effects from the use of Pondimin, you may qualify for damages or remedies that might be awarded in a possible class action against Pondimin, please fill in our form on the right to submit your complaint.
Stay Informed
Get the latest on class action lawsuits, settlements & more! Subscribe to our free weekly newsletter.
Get our Newsletter!
Submit a New Complaint
Been wronged by a similar product or service?
Click here to send us your complaint.

Posted by
Paula Bail
on November 27, 2015
I took pondimin. I was recently diagnosed with right heart enlargement, pulmonary hypertension, asd with right to left shunting, pfo and atrial aneurysm. Because of the pondimin being known to have increased my risk by 300% of developing pulmonary hypertension and then compounded with the congenital heart defect would I be eligible. Of note I stopped taking the medication due to severe side effects. I worked at the hospital and was not able to walk the step down unit without becoming so winded I had to stop and take a break.