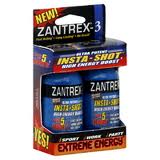 Central Islip, NY: Snooki, of "Jersey Shore" fame, is facing a federal consumer fraud class action lawsuit over allegations she promoted the diet pill Zantrex knowing that the pills don't work. Basic Research LLC, Zoller Laboratories, three of their officers, and Nicole Polizzi aka Snooki are named as defendants by lead plaintiff Ashley Brady , who claims Zantrex combines caffeine with herbs that are "unsafe and ineffective for weight control or appetite suppression." Brady further alleges that the three officers have been ordered to cease and desist selling fraudulent weight-loss products
In the complaint, Brady states she bought a bottle of Zantrex-3 in 2010 after reading the label's claims stating the drug would provide "546% More Weight Loss Than America's #1 Selling Ephedra-Based Diet Pill," and that it would make her lose weight "without diet and exercise."

According to the lawsuit, "Snooki represents ... that Zantrex is safe and effective for weight loss and fat loss," the lawsuit states. "These representations are false, misleading and deceptive because ... Zantrex is neither effective nor safe for weight loss nor fat loss." The complaint states that Snooki is the face of the Zantrex brand, promoting it on her websites, on YouTube, Twitter and Facebook, and in celebrity gossip magazines.

Basic Research bills itself as "one of the largest 'nutraceutical' companies in the United States, with annual sales revenues in excess of $50 million," the lawsuit states. Further, all three officers have come under fire for similar fraudulent schemes in the past. Defendant Dennis W. Gay is a principal and director of both Basic Research and Zoller; the FTC enjoined him in a similar case weight-loss fraud in 2006, according to the lawsuit. Additionally, defendant Daniel B. Mowrey was also enjoined from this conduct by the FTC's 2006 injunction, and defendant Mitchell K. Friedlander, with Basic Research received a cease-and-desist order from the US Postal Service in 1985, also involving allegedly fraudulent weight-loss products, and a second USPS order involving bogus breast enlargement products, according to the lawsuit.

Brady is seeking class certification, an injunction and damages for fraud, breach of warranty, unjust enrichment, negligent misrepresentation, and violations of the Magnuson-Moss Warranty Act. She is represented by Joseph I. Marchese with Bursor & Fisher, of New York City.

Posted by
sandy keane
on January 28, 2016
what do i do to register for the class action law suit with zantex