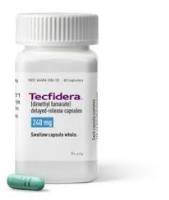 Los Angeles, CA: The first known incidence of PML, or progressive multifocal leukoencephalopathy, in a patient taking Tecfidera, has been confirmed by Biogen Idec, the maker of the new treatment for multiple sclerosis (MS).
According to CNBC, the patient, who recently died from complications of pneumonia, had been on the new drug for 4 1/2 years as part of a clinical trial of Tecfidera. For 3 1/2 of those years, the patient had severe lymphopenia, or low white blood cell counts. Currently, the labeling for Tecfidera contains a warning for lymphopenia, which is a known risk factor for PML.

PML is a rare brain infection, and a known side effect of Biogen's blockbuster multiple sclerosis drug, Tysabri, which was taken off the market in 2005. In 2006, at the urging of patients, the Food and Drug Administration allowed Tysabri back on the market, but required additional safety monitoring with its use. PML is still a feared side effect, though the company has taken additional measures to mitigate its risk. According to information from Biogen, the patient had not previously been taking Tysrabi.

Since Tecfidera entered the US market in 2013, more than 100,000 patients have taken the drug, making this single known incidence of PML rare.

However, as of September 2, 2014, there have been 495 confirmed cases of PML reported among patients on Tysrabi, and 111 deaths, according to a spokeswoman for Biogen.

Posted by
Melissa Boyd
on October 20, 2018
I have Multiple Sclerosis, and just tested positive for the JC Virus. For the few months, I was going to the infusion center, I was told it was just prednisone and not told of any risks like the JC Virus that can lead to PML. Now my doctor's office is only saying that I must have taken Tysabri or Tecfidera, but won't discuss anything further with me.
Posted by
DEBORAH SAMMONS
on January 14, 2016
MY HUSBAND TOOK THI DRUG FORYEARS AND PASSED AWAY 2 YEARS AO HIS HEALTH WENT DOWN