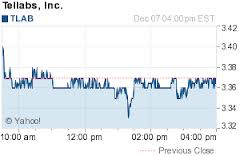 Los Angeles, CA: A securities class action lawsuit has been filed in the United States District Court for the Northern District of Illinois on behalf of a class consisting of all purchasers of the securities of Tellabs, Inc. ("Tellabs" or the "Company") between October 26, 2010 and April 26, 2011, inclusive (the "Class Period").

The securities lawsuit charges Tellabs and certain of the Company's executive officers with violations of federal securities laws. Tellabs designs, develops and supports telecommunications networking products. The Complaint alleges that throughout the Class Period, the defendants made false and/or misleading statements, as well as failed to disclose material adverse facts about Tellabs' business, operations and prospects. Specifically, the Complaint alleges that the defendants failed to disclose, among others: (1) that in the fourth quarter of 2010, the Company was changing its distribution arrangement with a customer; (2) that this change to the distribution arrangement masked that Tellabs' business was declining substantially faster than the Company had represented to the public; (3) that the Company's North American business was slowing at a greater rate than the Company had represented to the public; and (4) that, as a result of the above, the defendants' positive statements about the Company's business, operations and prospects lacked a reasonable basis.

On January 25, 2011 Tellabs announced its financial results for the fourth quarter of 2010. While the Company's revenue of $410.5 million was purportedly in line with the low end of its previously issued revenue guidance, Tellabs disclosed that its quarterly revenue had substantially benefitted from a change to its distribution agreement with a customer. On this news, shares of Tellabs declined $1.35 per share, almost 20%, to close on January 25, 2011 at $5.69 per share, on unusually heavy volume.

Thereafter, on April 26, 2011, the Company announced its financial results for the first quarter of 2011, which further reflected substantial weakness in its North American business. On this news, shares of Tellabs further declined $0.49 per share, almost 10%, to close on April 26, 2011 at $4.90 per share, on unusually heavy volume.

If you have suffered from financial losses, you may qualify for damages or remedies that may be awarded in a possible Tellabs, Inc securities class action lawsuit. Please fill in our form on the right to submit your complaint for a free evaluation.