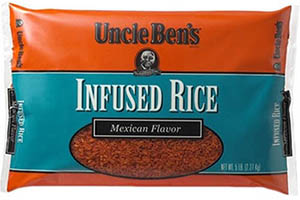 Washington, DC: Mars Foodservices is recalling all lot numbers of Uncle Ben' Infused Rice linked to recent illness in Texas. The Food & Drug Administration (FDA), the Centers for Disease Control and Prevention (CDC), and state and local officials have been investigating a cluster of illnesses associated with Uncle Ben' Infused Rice sold in 5- and 25-pound bags.
On February 7, 2014, the FDA' Coordinated Outbreak Response and Evaluation Network (CORE) was notified of a cluster of illnesses at three public schools in Katy, Texas. Thirty-four students and four teachers experienced burning, itching rashes, headaches and nausea for 30 to 90 minutes, before the symptoms went away. Uncle Ben' Infused Rice Mexican Flavor with the lot number 351EKGRV01, made by Mars Foodservices of Greenville, Miss., was the common food item eaten by ill students.

The FDA notes that the affected products would have been sold to food service companies that typically distribute to restaurants, schools, hospitals and other commercial establishments. However, the products may be available over the Internet including Amazon and warehouse-type retailers, such as Sam' Club.

The symptoms associated with this illness include a red burning/itching rash, headache, nausea, and flushness of the skin. The symptoms appear very shortly after consuming the rice product and pass within 30 to 90 minutes.

Mars Foodservices is recalling all bags and all lot numbers of its Uncle Ben' Infused Rice products produced in 2013: .

Investigation into this outbreak continues.