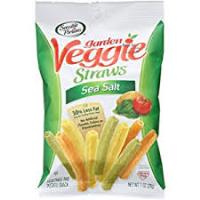 Santa Clara, CA: A consumer fraud class action lawsuit has been filed against The Hain Celestial Group Inc, alleging it falsely advertises the vegetable content of its Garden Veggie Straws products.
Filed by John Solak and Jim Figge in New York Federal court, the proposed class action states the marketing for the Veggie Straws leads consumers to believe that the products are made of vegetables such as potatoes, tomatoes and spinach. However, in reality, the lawsuit states, the five main ingredients are actually potato starch, potato flour, corn starch, tomato paste and spinach powder. Therefore, the plaintiffs allege Veggie Straws do not contain the nutritional benefits associated with whole vegetables.

“Although defendant markets the Garden Veggie Straws as healthful and nutritious, defendant’s product is devoid of the health benefits plaintiffs and other reasonable consumers associate with consuming real ripe vegetable produce or products,” the complaint states.

“Although the marketing and labeling of the Garden Veggie Straws depicts whole tomatoes, spinach leaves and potatoes, and separately claims those vegetables are ‘garden grown’ and ‘ripe,’ there are no garden grown or ripe vegetables in the Garden Veggie Straws,” the lawsuit states. “Instead, the Vegetable Straws contain highly processed by products of what were once vegetables, and with respect to tomatoes and spinach, only contain trace amounts of those by products upon information and belief.”

The plaintiffs claim that Hain Celestial’s misrepresentation of the Veggie Straws plays on consumers’ desire to eat healthy snacks, enabling the company to charge higher prices and increase company profits.

The plaintiffs are represented by Sergei Lemberg of Lemberg Law LLC.

Posted by
rachel dillon
on October 24, 2017
have bought these several times over last few years for my kids because I thought they were healthier than chips, have a bag in my kitchen now that just bought last week.
Posted by
Barbara Colon
on October 17, 2017
I buy this for my kids all the time thinking they're good for them and healthy. Why do this company treat us like noting? Very disappointed,
Posted by
Evelyn wallo
on October 8, 2017
I have bpught these several times and bought different varieties. I thought they were healthy and better for her than the greasy chips. This is a surprise to me. This is wrong to try and fool people.
Posted by
Bev Walsh
on September 17, 2017
I;ve been buying these for myself, thinking that with me losing weight in a healthy way, they would be better than regular potato chips. With this lawsuit, I'm shicked to find out that they are highly processed with powders of what was once a healthy vegetable all by itself.

I feel defrauded and wish to be added to this lawsuit.

Posted by
Kym Hall
on August 13, 2017
I've bought these many times thinking they were healthy
Posted by
Wendy Stevens
on July 23, 2017
I've bought these for my Granddaughters as they seem to be a healthy alternative to chips.....please add me.
Posted by
Moranda Meyer
on July 10, 2017
I also buy these often, thinking they're a healthy choice. It's wrong for companies to mislead the consumer like this.
Posted by
Kenneth Jaycox
on July 10, 2017
I have bought these chips thinking I was eating health. I feel I have been miss led my this company.
Posted by
Deborah
on July 10, 2017
I actually thought these were good for you and am shocked that they actually just jacked the price up and misbranded the product to trick me into buying them. How can I get my money back and an apology?
Posted by
DEB MILLS
on July 9, 2017
I have been eating these for the last 4 years regularly, I'd say a bag a month. I've fed the to my kids and grandkids, their friends, and . my elderly mother. I'm really pissed. these are twice the cost of chips. I want to be added to this lawsuit.
Posted by
Sharon Roark
on July 9, 2017
My wife has bought this product on several occasions because I am strict vegan. Very unhappy to learn YET ANOTHER company has lied.