What do baby bottles, flame retardants and some resins have in common? They all contain Bisphenol A (BPA), an industrial chemical used to make polycarbonate plastic resins, epoxy resins, and other products. Because this kind of plastic is lightweight and heat resistant (among other attributes) it is used in a wide variety of products including reusable food and drink containers and baby bottles.

Research has proven that BPA leaches from plastic bottles when heated but also escapes from baby bottles with regular washings. 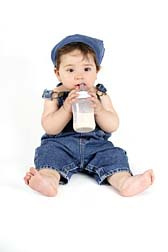 Some experts believe the chemical is a serious public health hazard and should be banned, while others-- such as manufacturers of baby bottles—say there is no danger. Avent America, Inc, one of the largest US baby bottle manufacturers, confirms that "our baby bottles are made from FDA-approved polycarbonate plastic which has been used in the manufacturing of baby bottles for over 30 years...the overwhelming body of scientific evidence and research shows that this material is totally safe."

A billion dollar class action lawsuit has been filed at the Los Angeles Superior Court against six leading manufacturers of baby bottles: Avent America, Evenflo, Gerber, Playtex, Dr. Brown's and Nalgene. All six manufacturers use BPA in the production of many of their plastic baby bottles and toddler sippy cups.

Since the late 1990s, studies have indicated that exposure to BPA, even in low doses, could cause adverse side effects. BPA's molecular structure is similar to estrogen, the hormone responsible for sexual development.

Environmental Health Perspectives recently published a report stating that "BPA exposure may interfere with the development of normal sex differences in cognitive function. In particular, BPA contamination could have long-term effects on children's learning potential."

Newborn babies up till the age of three are most vulnerable to BPA contamination because their reproductive system is developing at this time.
High levels of BPA could activate female hormones in males, cause hypospadias-- a birth defect of the penis where the urinary tract opening is not at its normal place at the tip, but is on the underside of the shaft-- and undescended testicles. It can trigger early puberty, and it has also been linked to infertility. Studies have shown that low levels of BPA have affected the reproductive system of rodents. Other studies have linked low doses of BPA to cancers, impaired immune function, obesity, diabetes and hyperactivity.

What You Can Do

READ MORE LEGAL NEWS
More News
Never use plastic to microwave food and liquid. If you must use plastic, never pour hot liquid into the bottle—the higher the temperature, the more BPA is released. The amount of leaching has been found to be seven times higher in bottles more than three months old, which can be attributed to scratches caused by harsh washing techniques.


READ ABOUT THIS LAWSUIT

If you have been diagnosed with cancer in this BPA case, please contact a lawyer involved in a possible [Bisphenol-A Lawsuit] who will review your case at no cost or obligation.
Request Legal Help Now