A two-year study commissioned by the Environmental Working Group (EWG), in conjunction with Rachel's Network, found that most US infants are contaminated in the womb with bisphenol A (BPA). Alarmingly, further tests found 232 other common household chemicals in the umbilical cord of American babies. 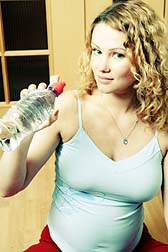 "Our results strongly suggest that the health of all children is threatened by trace amounts of hundreds of synthetic chemicals coursing through their bodies from the earliest stages of life," said the EWG.

Although the laboratory tests were small (BPA was found in 9 of 10 cord blood samples from babies of African American, Asian and Hispanic descent), they are significant. The 10 children in this study were born between December 2007 and June 2008 in Michigan, Florida, Massachusetts, California and Wisconsin.

During the Senate hearing on December 2, 2009, Senator Lautenberg said that these infants "face the possibility of chronic, life-long health problems from the day they are born."

Other chemicals found in US newborns included a toxic flame retardant chemical used in computer circuit boards called tetrabromobisphenol A (TBBPA), synthetic fragrances (Galaxolide and Tonalide) common in cosmetics and detergents, and perfluorobutanoic acid (PFBA, or C4), used by the Teflon chemical family to make non-stick and grease-, stain- and water-resistant coatings for cookware, textiles, food packaging and other consumer products.

BPA is a synthetic estrogen used by US factories in a variety of products, from plastics to epoxies. It is found in polycarbonate plastic food and beverage containers, such as water and infant bottles, as well as in the epoxy resin lining of cans and other sources.

According to the November 8 edition of the New York Times, each American uses an average of six pounds of synthetic estrogen per year. More than 92 percent of Americans have BPA in their urine.

BPA can enter cord blood by way of food and beverages stored in containers such as polycarbonate plastic bottles and as metal cans lined with BPA-based epoxy resin.

The US Food and Drug Administration (FDA) declared BPA is safe based on estimates that people consume only small amounts each day from food. However, in June 2009, the Endocrine Society said that "even infinitesimally low levels of exposure [to chemicals that disrupt the endocrine system]—indeed, any level of exposure at all—may cause endocrine or reproductive abnormalities."

Increasingly, experts have received reports of boys born with malformed genitals, girls who begin puberty at age 6 or 8 or earlier, breast cancer in women and men alike, and declining sperm counts among men. The Endocrine Society recently warned regulators that these kinds of abnormalities may be a consequence of the rise of endocrine-disrupting chemicals, especially BPA.


READ MORE BPA LEGAL NEWS
More BPA News
In November 2009, Consumer Reports found BPA in the canned liquid version of Similac Advance infant formula (but not in the powdered version) and in canned Nestlé Juicy Juice (but not in the juice boxes), which indicates that the BPA in the food likely came from an interior coating used in manufacturing many cans.

On its website, The Environmental Working Group says that "any chemical found in cord blood should be given highest priority for tough regulatory action to protect public health."

Lawyers and advocacy groups are now calling for manufacturers and government regulators to eliminate the use of BPA in can linings and all materials that come in contact with food and beverages.