"I purchased a Graco crib for my one-month-old granddaughter in 2005," says Karin Corbett. "We assembled it and when I put her in the crib, the side came apart-- If we weren't right there, she would have slipped right through it." Fortunately, they may have prevented another Graco crib death.

"I grabbed my granddaughter, Aubryana, and my daughter grabbed the railing at the same time," says Karin. "Then I phoned Graco and they said I had put it together incorrectly. I took it apart and re-assembled the crib, this time with two other adults; we made sure to follow every direction carefully." Like [other complainants], Graco told Karin that it was her fault. 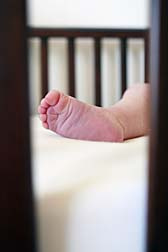 But we waited a few months before putting Aubryana back in the crib—I was very apprehensive. About one month later my daughter was resting upstairs and I put my granddaughter in the crib—she seemed fine. I went upstairs to do some cleaning and about 30 minutes later I heard her screaming! I raced into her room and found her leg stuck between the railing and the end piece—the side had come apart. Her head was on the mattress and her leg was sticking down; she could have easily broken her leg.

The bruise on her leg was so bad it was still yellow when she had her six-month-checkup, two months later! When the accident happened, I called her pediatrician because she was bruised that badly. 'If she can bear weight on her leg, she will be fine,' he said. When we went into his office for the check-up, they asked what I had done with the crib.

I told her pediatrician that the crib had been thrown out, but not before I phoned Graco again to return it. They gave me the same answer again—that I had assembled it wrong—that it was my fault. I was pissed off. I tried to return the crib to Target, the retailer. But Target said because it had a problem, I could only return it to Graco. I told them that was absurd because I already talked to Graco. Then I came home and might as well have taken $200 and thrown that out. That's when I chucked the crib in the garbage.


READ MORE LEGAL NEWS
More News
A few weeks ago I heard about the recall on the Internet news. The crib featured wasn't the same one - mine had a drawer underneath it. But I found the Graco recall site and then I saw the picture of Aubryana's crib. Sure enough, it had been recalled as well. Graco had my phone number and address - they never even called to let me know this was a defective product. I have had this same number and address for 10 years - there is no excuse.

What if I wasn't there to save her? My daughter was a teen Mum and with her inexperience, what if she had to deal with that on her own? She would have just stuck the crib back together and put my granddaughter back in it. I know that one baby already died—it could have been my granddaughter.

I always bought Evenflo cribs for my kids. This was my first experience with Graco and the only reason I got it was because my daughter picked it out. Needless to say none of my grandchildren will ever go into a Graco crib again."

If your child has suffered damages in this hazardous product case, please contact a lawyer involved in a possible [Crib Entrapment Lawsuit] who will review your case at no cost or obligation.
Request Legal Help Now