"My 10-month-old daughter got stuck in her Graco crib twice," says Maria DeLaGarza. Fortunately she got out with only a few bruises. "I was terrified that I couldn't get her out and she was traumatized." Sadly, there have been four known Graco crib deaths; little Michalla was lucky. 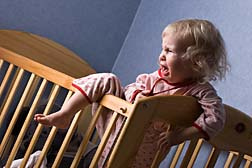 But luck shouldn't come into the equation when it comes to product safety, especially products for children. Especially cribs.

"When I saw the news last week that an infant had died because of a defective Simplicity [(the manufacturer of Graco] crib, I checked [online] to see if the model I had bought had been recalled," says Maria. Sure enough, Michalla was playing in a defective crib. And she had been stuck in it—twice.

"The first time Michalla got stuck, she had her legs caught in the side," says Maria. "This type of crib comes with a dresser attached to it. On the dresser, a railing comes apart and when I found her she was laying face down and her leg was stuck—one side comes loose and it had come off the track and pushed forward.

"The second time she was kneeling towards the front of the crib and her knee got caught in the railings. Luckily I was right there. She was screaming her head off and we couldn't get her out—my husband tried to stand her up a bit to push her leg through but her knee wouldn't come through the two pieces of wooden railing. I pushed on the sides and hit her knee through it to get her out. She got a bit bruised up and you could see indents on her leg from where she was stuck.

My daughter used to sleep in this crib but after these two incidents she won't sleep in there again. Now I would only put her in the crib if I was sitting next to her.

I tried to call Graco crib's 1-800 number but you can't get hold of a human. A taped message asks your address, name and phone number so they can send you a replacement kit for the track. In other words, they want you to repair a defective product!


READ MORE LEGAL NEWS
More News
I just want my daughter to be safe; it turns into a toddler bed and when I tried to assemble that part, the two little rails have a big gap that are attached to the side—it would be so easy to get her clothes stuck in this gap if she tried to climb out.

All I want to do is get a new, reliable crib and not this brand. I want to be reimbursed for the cost of this crib: it was about $200.

This manufacturer deserves the most severe punishment it can get. They cannot bring these babies back. I don't understand why they didn't do more research. Apparently they don't want to talk to consumers and they won't acknowledge this horrendous issue. They need to do something now for consumers: give us a product that isn't going to fall apart or kill our kids. Pick up these faulty cribs, these death traps, and give us our money back. "

If your child has suffered damages in this hazardous product case, please contact a lawyer involved in a possible [Crib Entrapment Lawsuit] who will review your case at no cost or obligation.
Request Legal Help Now

Posted by
Cassie Branum
on July 1, 2018
My son is 10 months old and there were no warninvs that come with the crib. I have a graco crib and up until now no problems but he has gotten his leg stuck 3 times and if he were to twist in any way his leg would be broken. Luckily I heard him screaming and ran to free him before that happened.