In a stunning announcement that also provides a peek into the vaults of a pharmaceutical giant, it was revealed late yesterday that Merck & Co. Inc has thrown the first volley that it hopes will result in a settlement of Vioxx lawsuits to the tune of $4.85 billion.

That figure is being offered to the plaintiffs involved in some 27,000 lawsuits still on the books, launched by individuals or families harmed by the infamous drug Vioxx. Since it was pulled from the market in 2004 over concerns of increased risk factors for heart attack and stroke, Merck has been inundated with lawsuits, and for good reason...

Merck, like so many drug manufacturers before and since, was accused of ignoring the safety and potential well being of consumers by hiding, and/or suppressing damaging clinical trial data that showed a definitive health risk. A study in 2004 confirmed what Merck already knew, and the public fallout left it no choice but to pull the drug. 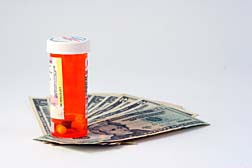 However, it was learned that a similar clinical trial in 2000 resulted in similar findings, and that data was never communicated to regulators or the public.

The $4.85 billion proposed settlement, as reported in the [New York Times] this morning, would address 27,000 lawsuits and cover about 47,000 sets of plaintiffs, translating to about $100,000 per plaintiff on average, before legal fees and expenses are factored in. As the latter can eat up 30 to 50 per cent of the settlement, many plaintiffs would wind up pocketing about $50,000. Individual payouts would vary according to the severity of reaction to Vioxx, and how long the drug was taken.

Some may argue that the $4.85 billion isn't enough, given that it represents less than a single year's profits for the pharmaceutical giant, the third largest in the country. Some analysts expected Merck's overall liability in the Vioxx debacle to reach $25 billion.

Plaintiffs still have to approve the settlement, which was negotiated just after midnight this morning by a steering committee representing lawyers who have sued Merck on behalf of their clients in federal court. Plaintiffs who decide to reject the offer have the option of continuing to litigate on their own, however lawyers close to the proceedings expect adoption by the 85 per cent majority, necessary to see it approved.

Lawyers with knowledge of the deal say the deal is a good one, and assuming most in the legal community will take the same view, plaintiffs might have some difficulty finding someone to represent them individually.

Additionally, Merck has been racking up the points in the win column of late, after initially taking a $253.5 million hit in 2005, when a jury in Angleton Texas returned a verdict against Merck and awarded plaintiff Carol Ernst a sizeable award. Ernst's husband died less than a year after starting on Vioxx.

However, since deciding to take cases to trail rather than settle, Merck has scored a host of victories in several states against plaintiffs who either could not prove they had taken the drug, or presented other risk factors that mitigated the impact of Vioxx in their cases.
Merck's recent success in the courts, with winning verdicts and the tide turning in its favor, has put individual plaintiffs at a disadvantage.


READ MORE LEGAL NEWS
More News
While there is widespread speculation that the needed majority of plaintiffs will be found to seal the deal, Merck's troubles are far from over, as it still faces several civil and criminal investigations at the behest of several states and the Federal Justice Department.

Even so, industry watchers suggest that this settlement offer will mitigate any fear of a much larger payout that could bankrupt the company.

Others say fat chance of that. With annual profit margins already eclipsing the $4.85 billion payout figure, there is little doubt the pharmaceutical juggernaut will easily absorb the hit. Already Merck has racked up legal bills totaling $1.2 billion.

And as large as the $253.5 million jury award against Merck was in 2005, it represents about half what Merck spends each year defending Vioxx—about $600 million annually.

If you or a loved one are taking or have taken Vioxx and have suffered from a heart attack or stroke, please contact a lawyer involved in the [Vioxx Lawsuit] who will review your case at no cost or obligation.
Request Legal Help Now