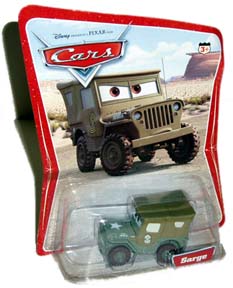 On August 14, 2007 more than 18 kinds of magnetic toys and another 436,000 made with lead paint ñ including 32,800 Sarge die-cast cars that contain lead paint -- were recalled less than two weeks after Mattel recalled nearly one million Chinese-made toys sold in the U.S.

The first recall on August 1 involved 1.5 million China-made Sesame Street, Dora the Explorer, Big Bird, Elmo, Diego and other childrenís products as they might contain excessive levels of lead. Eighty-one other types of Fisher-Price branded toys sold in U.S. stores since May 2007 were included in the massive recall.

Mattel's executive vice-president Bryan Stockton has not ruled out the possibility of more recalls. He also said that, while Mattel is now testing every single batch of toys made, in China and elsewhere, the company will continue manufacturing goods in China.

A class-action lawsuit requests that Mattel pay for testing of any children who are at risk of lead poisoning from its toys. The lawsuit wishes to make Mattel responsible for establishing a fund that would pay for children to be tested for lead poisoning. Parents who are concerned about their childrenís health would then be able to access this fund and get their children immediate treatment if necessary. (Under current U.S. regulations, children's products found to have more than 0.06 per cent lead accessible to users are subject to a recall.)

Lead is very toxic to children under the age of seven because it can cause permanent damage to developing bodies and brains. Such damage can include brain damage, learning disabilities, and neuropsychological deficits. Children who are exposed to lead may not exhibit signs of poisoning until years after the exposure, making immediate testing vital in detecting cases of lead poisoning.

The latest recall includes magnetic toys such as Polly Pocket dolls and Batman action figures, It covers magnetic toys manufactured between 2002 and January 2007, and expanded on a similar recall made in November 2006.

China produces 80 percent of the worldís toys and trying to avoid Chinese products is easier said than done. Mattel is asking parents to visit its website if they think one of the affected toys is in their home. Consumers are advised to immediately take the product away from their children and contact the toy company to receive a voucher for a replacement item. You may also want to seek legal advice.

If your child has been exposed to lead paint contaminated toys, please fill in our form on the right to send your complaint to a lawyer to evaluate your claim at no cost or obligation.
Stay Informed
Get the latest on class action lawsuits, settlements & more! Subscribe to our free weekly newsletter.
Get our Newsletter!
Submit a New Complaint
Been wronged by a similar product or service?
Click here to send us your complaint.
RELATED NEWS
More News

Posted by
Leann
on February 7, 2016
I too have the same problem. My daughter played with the recalled toys and had them in her mouth
She Also lost her speech and become slow. And she was smart and talked and knew everything before I bought the toys that were recalled by fisher price All the children that where diagnosed with autism probably had lead poisoning from the toys
Posted by
New Jersey
on November 30, 2007
Our daughter health has deteriorated with the lead poisoning and is on medication for 3 months everyday. My daughter is scared to play with any toys now due to the problem with the the toys we threw away. All the toys we got rid of were made in China.
Posted by
Mississippi
on November 2, 2007
My son is almost three and because of the toys he has high levels of lead. He has to be tested again in a month to see if the levels have gone down. But it is hard to find out what toys have it and what don't. Im going to have to throw away all the toys we have.
Posted by
New Hampshire
on October 10, 2007
My biggest complaint is that the lead poisoning from Barbie dolls and Mattel cars could be the very reason my young adult children were all diagnosed with learning disabilities. I had a Mattel Baby First Step when I was young, that I handed down to my niece. Both myself and my niece had learning disabilities. My other complaint, is the Mattel car collectibles that I have, that I thought would have a value to, are now considered no value.
Posted by
Wisconsin
on September 20, 2007
Child has learning disabilities and autism. I feel that a link between chinese toys and autism might be found, if you look at the time frames when these toys started rolling in in mass is about the same time autism rates have gone up.I feel my child has been hurt by this not to mention the $100s we are out on the faulty products.And the stress and worry we are now going through. Something needs to be done about this terrible crime against children and parents.
Posted by
Pennsylvania
on September 5, 2007
I have 2 grandchildren ( now 14 months & 10 months) who played with 7 of the recalled toys, They showed signs of lead poisioning, vomiting,Constipation,Irritability ect.
The younger showed signs first, we had her tested and her lead level was abnormal so she had to have a second one. The other child started to show same signs so he was also tested. We are now waiting for the results of these test to come back.
My self as a grandparent and my daughter's as the mother's should not have to endure the stress of this!
We made purchases from a well known company having trust in them to protect our children only to have something like this happen not once but now have had 3 major recalls in a few short weeks! They need to be held accountable for this!

Posted by
Oregon
on September 4, 2007
Both my son, 10 yrs old and daughter 4 yrs old have been playing w/ lead based toys and toys that could cause death due to swallowing magnets! Let alone the lead paint issue! I have purchased Polly Pockets, Dora and Diego toys, and too many other Fisher Price toys to mention. Damages, possible lead exposure to my children and loss of many hundreds of dollars in toys. Have you ever tried to take toys away from children that have been able to play with them and now can't? Sorry I have to take all your toys away because Mattel thought we wouldn't find out about the lead and needed a bargain. You can't reason w/ a four year old. I would rather pay a higher price than subject my children to this!
Posted by
Florida
on September 3, 2007
I had removed all painted Mattel toys from my son (with much emotional distress) upon notification of this recall and had him tested immediately through his Pediatrician. The lab work came back positive for lead in his blood. I am not a Physician nor can I tell the future. I sincerely hope this has not harmed my son's cognitive ability and has caused great stress and worry for myself and my wife wondering how this will affect HIS future. We pride ourselves in keeping our home safe and clean of hazards that might harm our son and/or ourselves and a company (Mattell) we trusted (not to mention Wal-mart and Walgreens) has allowed an inferior and harmful product to enter our home and potentially harm our family. I have since returned this car to Mattel, on their request, from the recall portion of their website for "testing". The information they requested (number on the bottom) identified the Sarge I had to be one of the Made in China vehicles with lead in the paint.