Tammy Burbo had Lillian, her six-year-old daughter, tested for lead after learning about lead paint in Mattel toys and the subsequent Mattel recall. The results were high enough to concern her pediatrician and high enough to make Tammy worried about Lillian's future overall health.

The Centers for Disease Control and Prevention (CDCP) says there is no safe level of lead exposure for children. 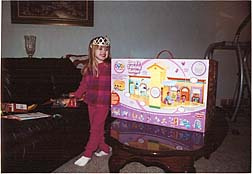 "Lillian was in Florida when I heard about the recall," says Tammy. "She hadn't played with her Mattel toys for about a month but we had her blood tested for lead anyway when she got home."

Tammy did some research and thought that some "issues" that Lillian displayed might have been related to lead poisoning. One of them is her eating habits. "Everything tastes bad to her—it is a big problem getting her to eat anything," says Tammy.

"When I found out about the recall I just said 'Ohmigod -- I was both devastated and a bit relieved at the same time knowing what was causing these issues but you don't know what the long-term effects are—I have no idea how she will be effected by this level of lead in her blood down the road."

It took five days to get the results back from the lab. In the meantime, Tammy packed up all the Dora toys and any others that were suspect and explained to Lillian that her toys might be harmful. "We counted 100 Dora figurines and 90 percent of the toys she had were on the Mattel recall; she also had the Sesame Street figurines," says Tammy.

Before the tests came back, Lillian found all her toys that Tammy packed away. "She had taken all her Dora collection out of the bin and washed them --she loves all her Dora toys," says Tammy. "Lillian had a bowl of soapy water and a roll of paper towels. Then I explained to her that you can't wash out lead. After that she refused to touch them.

The test results came back at 9.7. Lillian's pediatrician wanted to know why they were high; could there be lead in the house? Tammy told her about the Mattel toys. "The doctor told me to throw them all out," she says. "She also said that if Lillian was tested before going away to Florida, the results could have been a lot higher.


READ MORE LEGAL NEWS
More News
"The lead didn't come from my house. Although it was built in 1969, when we moved in, we painted every nook and cranny—we primed and painted everything. The primer is a sealer and the paint we purchased does not contain lead—it was water-based. And my two older children don't have high lead levels—they were too old to play with these toys." (Lead-based paint is the major source of exposure for lead in US children and almost all houses built before 1978 contain lead-based paint.)

"Lillian is due for another blood test November 1st and I predict that her lead level will have gone down. My daughter played with her toys constantly—she also chewed on them. Her skin absorbed them as well because she always had her fingers in her mouth."

My pediatrician told me that her lead level will hopefully come down in a few months as long as she has no more contact with lead-based paint. And we had to put her on a special diet—high fiber and fruit, nothing else. At first that was hard on Lillian but we explained it to her and now she walks around saying, 'I have lead poisoning.'