Were you looking for Wen Hair Loss lawsuits?
March 23 2015 - by Lucy Campbell 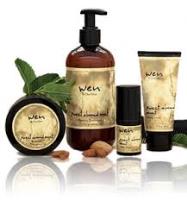 Los Angeles, CA: Wen Hair Products and marketing company Guthy-Renker are facing a defective products class action lawsuit alleging the line of products cause hair loss. Filed by women living in Florida, Hawaii, Indiana, Minnesota, New Jersey and North Carolina, the plaintiffs all allege they have suffered severe hair loss after using 'Wen Hair Products'.
The Wen line of products is designed, manufactured and sold by Chaz Dean, a Hollywood hair stylist, and Guthy-Renker. The defendants claim that the Wen hair products condition the hair, and limit or repairing damage caused by regular hair treatments and daily styling. However, the products cause severe and possibly permanent damage to hair, including hair loss to the point of visible bald spots and severe breakage, according to the plaintiffs.

According to the lawyer representing the plaintiffs, many of the women who have suffered damage called the companies for help, only to be told that their complaints were unusual. However, the companies had received prior, similar calls, which they did not disclose.

My hair is a disaster my once upon a time lovely curls are no longer beautiful lost alot of my hair specially in the frontal area. would like to join this lawsuit

Posted by
Jeanine valverde
on December 14, 2015
I have not been impressed with the wen product. It does not do what it claims on tv. I have gotten itchy sores on my scalp. When I itch my scalp it automatically starts bleeding. I have bad flakes. My scalp just flakes off. I lose hair while washing also.
Posted by
Sylvia Ramirez
on December 14, 2015
My hair has been falling out also because of this wen stuff. For 5 months now.
Posted by
Christel
on December 11, 2015
I purchased the Wen Lavender hair products about a year ago from Gunthy Renker. I wasn't thrilled with the initial results but because there was so much product in each shipment (I selected an auto shipment option), I wanted to use it until the product was gone. After 4 or 5 months, I realized I was losing much more hair (shoulder length) than usual while shampooing. At first, I thought it was just because I'm in my early 50s and that it must have be menopause related. But I was losing so much hair that I really became concerned. After I stopped using the products completely, and switching to a Kiehl shampoo my daughter uses, the severe hair loss stopped within 2 weeks. I' ve had no episodes of extreme hair loss in the last 6 months. I was absolutely shocked. There is no doubt in my mind the Wen products were causing the hair loss. I threw all the products away. How frightening - and awful.
Posted by
Nasrin B.
on December 8, 2015
I began using Wen hair cleanser about two or three years ago. I loved the Shampoo and it revived my hair. I had to stop using it after a few months or so because it was so expensive. I reordered it again in August of 2015. My hair began falling out more than usual and I did not put the two together. When my cleaning lady repeatedly told me that there is a lot of hair all around the house and I have abnormal hair loss I was alarmed. In searching for the reason I found out that the Wen I began using back a few years ago had advertised it's ingredients as all natural Organic Aloe Vera leaf juice, Almond extract, Rosemary leaf extract, Chamomile extract...etc. Whereas the bottle in my hand has Cetearyl Alcohol, Hydroxypropyltrimonium, Cetyl Alcohol and many more chemical base ingredients that I would never use knowingly. I AM SHOCKED THAT EVEN WITH A CLASS ACTION LAW SUITE AGAINST THIS PRODUCT AND HUNDREDS OF VICTIMIZED CUSTOMERS SPEAKING UP ON LINE THIS AWFUL PRODUCT IS STILL BEING ADVERTISED AND SOLD EVERY MINUTE OF EVERY DAY!!!!
Posted by
Jackie
on November 28, 2015
After using wen from August to October my thick long curly hair was think dead with hair loss on the left side extream breakage and several bold spots scattered around my scalp after many visits to my doctor and many test my health was in perfect condition the stress devastation and heartbreak has had more impact on my life than anything I have ever encountered , yet when I discovered the cause and called Guthy RENKER for help advise there concern was did I not wish to be send further product ,.,, NO and I didn't prior to that call or constantly be charged without my knowledge !!!
Posted by
April Neis
on November 22, 2015
I used Wen hair products for 2 years and have in the past 6 months lost a third of my hair. I have bald spots and severe breakage on my hairline . I have discontinued using Wen . I have a healthy diet and have been checked by my doctor to determine I do not have a thyroid problem. I trusted in this product because it claimed to be all natural . I do not over process my hair with any chemicals, hair dryers or hot irons. I am dismayed by the fact they have been aware of this problem but continued to ship product to me without warning ! I would love to sue them but the only class action lawsuits I see involve Americans only. If anyone knows of a lawsuit for Canadians please let me know. The loss of my hair has caused me a great deal of stress and loss of self confidence.
Posted by
Beverley SIngletary
on November 14, 2015
I used Wen products for about 6 months or more and started having hair loss and had bald spots. I called up Gunthy Renner and explain what my experience and was told that have no complaints of hair loss. I discontinued using wen. I started getting cortisone shots in the bald spots. I saw some sprouts of hair but was diagnosed with a heart condition and had to have open heart surgery. I had to stop cortisone treatment immediately. I went to continue losing my hair but with my heart condition not much I could do. It's been 2 years now and I have thinning of hair and my hair texture is very rough . With being on heart medication for the rest of my life I cannot do any hair treatment and at this point there is nothing I can do. I am very self conscious about my hair and wish I never used the product. Wen destroyed by gorgeous and I am left with tangled thinning hair that up to this is still falling out.
Posted by
Angela Mitchell
on November 12, 2015
Updated. Use THIS.

I don't use this product everyday...only because I simply cannot afford to. It's expensive! That being said, had I of used it everyday, I may HAVE had balding! Thus far, I've had severe hair shedding. Like 3 handFULLS of hair per washing/brushing session, which is highly unusual for me. The worst part for me however, has been my scalp issues that have begun. It's horrible. Thick scalp and so very, very dry. My scalp is literally peeling away from my head! Which, you gotta know, does cause hair loss too! lots of shedding - or whatever you want to call it. Bottom line, I started to suspect WEN when all this was in line with my washes/styling. So, I'd had medical testing done for the scalp issues and gobs of hair coming out when ever I brush/wash it. But, all testing has come back normal. Meaning no medical issues to account for this newer development. (About a year and a half old). So, there's gotta be another reason, I thought. I had stopped ordering the Wen once I'd gotten suspicious. And in recent past, with what I have left over, I've used it even less...and the issues remain...I just hadn't been able to positively pin point it. Till I started asking friends and family that use it too AND researching any issues. It makes perfect sense, now.

Posted by
Angela Mitchell
on November 11, 2015
I don't use this product everyday...only because I simply cannot afford to. It's expensive! That being said, had I of used it every/or every other day, I may have had balding. Thus far, I've had "only" severe hair shedding. Like 3 landFILLS of hair per washing/brushing session, which is highly unusual. The worst part for me however, has been my scalp issues that have begun. It's horrible. My scalp is literally peeling away! Which, you gotta know, does cause more hair loss/ lots of shedding - whatever you want to call it. Bottom line, I started to suspect the shampoo when I'd had medical testing done for the scalp issues and gobs of hair coming out when ever I brush/wash it. Thus far, testing has come back normal, meaning no medical issues. So, there's another reason. I stopped ordering my Wen and use it even less now....But....each time I do...same issue.I just hasn't pin pointed....100% - till now. Makes perfect sense.