Looking Back on DaVita, Fresenius and GranuFlo Side Effects


On the final day of a spent year, prior to the arrival of 2014, it’s useful to look back from whence we came, and in so doing, peer into the GranuFlo side effects portfolio. With two primary players in the issue, there remains a vast collection of nuts and bolts, and moving parts that form the framework for a case that is far from cut-and-dried… 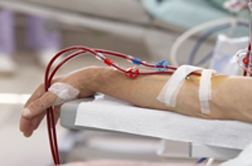 For the GranuFlo and NaturaLyte patient, there’s a much narrower focus - the simple act of undergoing kidney dialysis, which is undertaken thousands of times throughout the world each day without complication, suddenly, and without apparent explanation, turns ugly and results in GranuFlo cardiac arrest, or even GranuFlo sudden death. For the affected patients and their families, the various moving parts are not the issue. What matters to them is that it simply shouldn’t have happened at all.

DaVita Healthcare Clinics (DaVita) is one of two players in the GranuFlo and NaturaLyte portfolio. The other is Fresenius Medical Care, the manufacturer of the two dialysis products and a competitor with DaVita in the dialysis market. Both operate scores of dialysis clinics and are competing for market share.

DaVita is also the target of a GranuFlo class-action lawsuit for its role in allegedly putting dialysis patients at risk with regard to alkali dosing errors inherent with GranuFlo and NaturaLyte. DaVita, it should be noted, was also the subject of a federal investigation with regard to an alleged doctor kickback scheme - and the firm has also faced allegations of wage improprieties involving its employees.

But Fresenius Medical Care (Fresenius, FMC) is also the target of various GranuFlo and NaturaLyte side effects lawsuits. And for both firms - as it appears to be the case with any pharmaceutical company or medical device manufacturer - the exposure to legal action is simply the cost of doing business.

As a refresher, GranuFlo and NaturaLyte are two products manufactured by Fresenius - but also used by competitors such as DaVita - that are inherent with the dialysis process. GranuFlo comes in powdered form, while NaturaLyte is a liquid. Both products are used to remove toxins from the bloodstream during dialysis, and mixing of the products is integral to the establishment of optimum levels of bicarbonate in the bloodstream: bicarbonate that is too high poses a risk for NaturaLyte side effects or even GranuFlo sudden death.

In November 2011, Fresenius issued a strongly worded memo to doctors and healthcare practitioners in its Fresenius-branded dialysis clinics, informing their people of an internal study evaluating 941 patients in 667 Fresenius dialysis centers having suffered cardiopulmonary arrest during or following dialysis treatment. The study determined that these patients were six to eight times more likely to suffer heart attacks and GranuFlo sudden death if they had elevated bicarbonate levels.

The suggestion was that there was an issue with the labeling of GranuFlo and NaturaLyte - an observation backed up by an e-mailed statement to the Boston Business Journal (12/17/13) by Kent Jarrell, a spokesperson for Fresenius who noted that a subsequent FDA recall of GranuFlo and NaturaLyte involved the labels only, and not the products themselves.

“The FDA has not suggested any change in the production formulation or asked that the products be returned by clinics to FMC,” Jarrell wrote in an e-mailed statement to the Boston Business Journal. “We believe these lawsuits based on GranuFlo and NaturaLyte are without merit and we will defend them vigorously.”

The two new GranuFlo cardiac arrest lawsuits to which Jarrell is referring were filed December 16 in federal court in Massachusetts, and are among more than 300 lawsuits Fresenius is facing over the issue.

DaVita healthcare clinics are also facing their share of lawsuits. But the backstory that also impacts DaVita is what Fresenius is alleged not to have done - and that is to have shared the internal memo with non-Fresenius clinics employing the use of GranuFlo and NaturaLyte. Fresenius defended its decision, at the time, noting that the study results were still preliminary.


READ MORE GRANUFLO LEGAL NEWS
More GRANUFLO News
However, the US Food and Drug Administration (FDA) thought the issue was serious enough to mandate a Class 1 recall (of the labels, according to Jarrell) once the internal memo, issued in November 2011, was leaked to the FDA in March 2012.

Plaintiffs claim that Fresenius knew or should have known about the potential for alkali dosing errors and elevated levels of bicarbonate. Ditto for DaVita - although what liability Fresenius will face given the alleged failure to widely distribute its concerns over GranuFlo and NaturaLyte to non-Fresenius centers such as DaVita, remains to be seen.

The two most recent lawsuits against Fresenius Medical Care were consolidated, along with at least 145 others, and assigned to US District Court Judge Douglas Woodlock in a NaturaLyte class-action lawsuit.

That, together with the GranuFlo class-action lawsuit, will remain the focus of much attention in 2014.