People who have experienced the horror of having a plumbing fitting, like the Zurn Pex fittings, fail know all too well what an ordeal that can be. In addition to damage to floors, walls and ceilings, there can be mold growth and other health risks to deal with. If a leak flows for long enough, a home can be made uninhabitable by even a tiny leak. 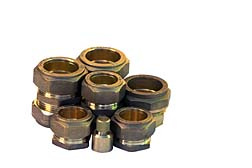 Barbara H. knows exactly what sort of devastation a plumbing problem can cause. She. is not sure if she had Zurn Pex fittings in her mobile home. However, what she went through is a cautionary tale for anyone dealing with faulty, or potentially faulty, plumbing. Barbara lost everything in her home, and even the home itself, because of an unnoticed leak.

"The leak was on top of the water heater," Barbara says. "It was where the pipe screws into the water heater. The pipe was leaking and throwing water up into the ceiling. The water heater was in a closet that we did not go into that often, so we did not know that there was a leak. Before we knew it, there was mold growing up inside the walls and ceilings."

Barbara's family only discovered the leak when her son went into the closet and noticed the mold. "I saw the room and I said, 'That is a fungus, we have to get out right now'." Barbara says. "I called the insurance company and they sent people out to investigate it. The investigators said we had to leave everything behind and get out right away. They said there were three kinds of mold spores growing in my home—the dangerous kind that can cause cancer.

"I lived in that home for 12 years. We had to move out because of the leak and I lost everything. The insurance company told us we could not mess with anything in the home; we had to just leave it because the mold had built up. They said the fitting had been leaking for awhile and that caused the mold to grow."

Since that time, in 2004, Barbara says she has noticed some health problems. She says she has suffered from shortness of breath, which she did not experience before the leak, and had to undergo some breathing treatments.


READ MORE LEGAL NEWS
"When you are buying a home and you are going to put most of your life savings into your home, somebody should be accountable if something goes wrong," Barbara says. "The insurance company didn't even pay me enough for a new home. This was somebody else's careless doing. We should be compensated."

People with Zurn Pex plumbing have also complained about problems with leaks in their plumbing systems. They say that they have had leaks in their walls and ceilings because the fittings have failed. Such leaks have caused costly damage to homes and also caused great inconvenience while the homeowners wait for the damage to be repaired.

If you have had damage caused to your home because of a failed Zurn Pex fitting, contact a lawyer to discuss your legal options.