Some call it a shimmy. Others call it the “death wobble.” Regardless of the name, the potential failure of a vital component integral to vehicle steering can pose dangerous and even fatal consequences. And in spite of Chrysler Dodge Ram Recalls, plaintiffs are taking the manufacturer to court over what has been alleged as a design flaw, together with allegations with regard to the unavailability of parts, and the inability to schedule appointments for repair and replacement. 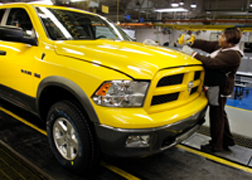 A proposed defective products class-action lawsuit has been filed against Chrysler Group LLC.

The Dodge Ram is a favored vehicle amongst working professionals such as contractors and farmers - or any individual in need of a rugged, dependable pickup. However, plaintiffs allege that Dodge Ram vehicles spanning model years 2008 through 2012 have been anything but.

The issue, according to court records, is the driver’s side tie-rod ball stud. Plaintiffs allege the component is defective and not sufficiently robust to withstand normal use. The allegation is that the component has the potential to fracture under normal driving conditions.

The problem - corrected with a redesign starting with the 2013 model year - can cause shimmy and wobble with the potential to cause the driver to lose control at high speeds. A proposed class-action lawsuit against Chrysler Group LLC was filed in early April.

The complaint referenced weakness exacerbated “by the defective design of the cross car steering linkage system, which allows contact between the ball stud and the ball housing, thereby weakening the stud.

“Shortly after releasing the 2008 model year class vehicles, Chrysler became aware of ball studs fracturing at a high rate necessitating left tie-rod replacements. Despite its awareness of the problem, Chrysler opted to conceal the existence of the defect from plaintiffs and the general public,” the complaint said.

“Chrysler has issued multiple recalls for the defect, but has yet to solve the problem and does not even have enough of the necessary parts to begin the repairs. Moreover, the defect is unrepairable, due to design restrictions on the size of the ball stud.”


READ MORE CHRYSLER DODGE RAM RECALLS LEGAL NEWS
More CHRYSLER DODGE RAM RECALLS News
The 2013 redesign of the venerable Dodge Ram, models 2500 through 5500, is viewed as a major step forward in addressing the alleged design flaw that affected earlier designs. But that does little for the owners of recalled vehicles who may have spent more money than they should have in an attempt to keep a defective vehicle on the road, and allegedly can’t get their existing recalled vehicle properly repaired.

For a contractor or other working professional, such allegedly defective products can affect business. “As a result of Chrysler’s practices, plaintiffs and class members purchased class vehicles they otherwise would not have purchased, paid more for those vehicles than they would have paid, unnecessarily paid - and will continue to pay - repair costs as a result of the defect, and suffered diminution of those vehicles’ resale value,” the complaint said.

The case is Shaun Sater et al. v. Chrysler Group LLC, Case No. 5:14-cv-00700 in the US District Court for the Central District of California.

Posted by
Scott Noffsinger
on November 8, 2016
I have a 2015 Ram 2500 ST model and have had the death wobble happen to me 4 times now. At approx 65 mph after hitting a bridge crossing the front end shake violently causing me to cross lanes and did not stop shaking til I hit the brakes and slowed down to about 25-30 mph. Supposed to be a heavy duty truck but so far this ram sucks. $40k for a truck I can't drive above 60 mph sucks. How do I get in on this class action lawsuit? Been to the dealer 3 times and they say nothing is wrong with the truck. Chrysler sucks!!!! I will never buy another one nor recommend them to.anyone. what a rip off. It's at a 4x4 shop now hopefully getting repaired at a cost of almost $1500.00. Chrysler should reimburse me for this.
Posted by
harold g riley
on October 30, 2015
I purchased my 2005 1500 ram 12/2005. on October 23,2007 I had to replace the passenger side tie rod end at 46457 miles. truck front end vibrated. align on 4/13.15 , still vibrating . these two services did not stop the vibrations. the windshield in direct sun looked like a tiny pieced jig saw puzzle, the entire windshield was like this, I was blinded in direct sun, I couldn't see through the windshield it was frosted looking. had to replace it 1/27/15.
I carried it to Eden NC dodge dealer, they replaced drivers air bag and a retainer, I assume on the rear end. in july 2010 my engine just blew no warning. 5000 miles early with my annual insp. and fluid and oil checks, my antifreeze level was full, no problems at all. can't believe an engine would just blow with no apparent reason. can't believe all of this.
Posted by
Diane Dunkle
on July 28, 2015
We got the N62 recall on our 2007 Dodge Ram 2500 that states left tie rod ball can fracture.Our truck got the death wobble and the passenger side tie rod broke.Vehicle is not safe to drive.We called local Dodge dealer about it and they said it isn't covered and we have to pay to fix.Others tell me the fix didn't stop the death wobble.
Posted by
Sherry Bass
on June 19, 2015
I have a dodge Challenger 2010 they were supposed to have fixed my timing chin for the recall my motor blew up 9 months later . I took it back to where I brought it and The original dodge company found out they never changed the bracket on the recall , but yet said they did and got paid for it. My son is also a mechanic and saw the same thing. we could have been killed. The motor is being replaced in it and they gave us a rental car, but this is not right, I also told them I wanted some money back for some sensors I had just put in which was probably showing something was wrong with the motor which was about $300 a week before it blew up. The Dodge Store is Nabor Dodge in Shallote NC that is the problem. The mechanic said he couldn't remember if he fixwed it or not but The Dodge store in Rockingham Nc said and took pics of it and proved it wasn't changed. Do you think I have a case against Naber dodge? Thank you
Posted by
Glen T
on May 12, 2015
I have a 2013 3500 Ram Big Horn with 24000mi and have experienced Death Wobble twice, just recently, once on a narrow bridge and once pulling an empty boat trailer, started at about 65 mph after hitting a small bump. The bridge episode was when we bounced over the expansion joints in the bridge. Both times we were put in a very dangerous situation, without control, and braking not taking immediate effect. It is at a Dodge dealer now and service mgr says the steering stabilizer needs to be replaced because it is blown. He said it will fix it, and drive like it was brand new again.
My wife won't ride in it again, and it will be hard to get the confidence needed to be comfortable driving it again.
Posted by
Daniel
on November 6, 2014
the 2014 was sold with a 3.55 rear axle per the window sticker, but I just got a call from Chrysler stating it's a 3.21 rear axle. they are offering (by phone only) to extend the warranty or a voucher for Mopar (parts only). I want the cost difference from what I paid and what I got.
Posted by
Gary Feaman Feaman Masonry
on October 8, 2014
Have2012 dodge and have had it ! Death steering. Traveling all over when on un even road. Heard enough bullshit and now lawyer will take over. Any one with me. Would like to start a class action suit against Ram ! Many other problems also. Rear end. Defective wiring. Missing inner Aluminum wheels on dump
Posted by
Michael Hummer
on September 12, 2014
My steering shaft broke completely at the joint under the car. I lost full steering control. Luckily i slammed on the breaks and didn't injure anyone. My car was towed to the dealership. What do I do? This should not happen to a 10 yr old vehicle with no rust under the truck at all. The shaft was completely solid with no rust. It was a clean break.
Posted by
mel
on September 1, 2014
Whatever changes they made have not solved problem. I also have 2013 3500 Ram and have experienced "death wobble". I have taken it to several dealerships with no solution. Currently the truck has been at dealership for three weeks. I will be contacting a consumer lawyer.
Posted by
Frank Regas
on July 13, 2014
How do I get involved and added to this Class Action. I own a 2007 Dodge Ram 1500 with the wobble, shaking and loss of control.
Posted by
Frank Edwin
on June 16, 2014
So we are to understand that dodge knows of the problem.
Dodge knows of the potential crash statistics.

Doge has hidden the problem for years.

Dodge is slow moving on replacing the damaged parts.

So from a case by case basis, the majority owners of this truck are to continue to "roll the dice" and wait for dodge to replace the part. ?

Hope your truck does not emboldened you in an accident before then.


Posted by
Vern marofke
on May 21, 2014
Redesign of 2013 dodge 3500 did not work . I have a 2013 ram 3500 mega cab 4x4 longhorn , and I have experienced death wobble at 8000km and again at 26000km. The truck is completely stock including factory tires. Truck going into shop on Friday but not feeling very optimistic . Going to be a long battle I assume.
Posted by
TimothyDonohue
on May 8, 2014
How do I get involved with the Class Action?
I am told from Chrysler Group LLC. parts will not be available until September 2014 to dealerships at limited quantities, 20 parts per month. The dealership informed me that DHS and Local government vehicles will be repaired first. Making the time the recall was issued Dec 2013, until repair is possible well over a year. Now the question; Is the repair possible according to the information above? I have the shimmy. Where the hell is the US Attorney Generals office and the US Consumer protection Agency?????
Posted by
Jolene Isbelle
on May 8, 2014
2005 dodge ram 2500 did the dodge death wobble on feb 3, 2012 and caused us to wreck on a narrow highway and go into oncoming traffic. It totaled our truck. When the wobble hit, we lost steering and had no brakes and never stopped until we hit trees. Thank GOD there were no fatalities.