For anyone who dismisses the Chrysler Dodge Ram Recalls as just another headline in the newspaper, need only be reminded that lives are sometimes at stake. And a recent accident involving a Dodge Ram that took the life of a passenger, may have been caused by mechanical problems, according to the police report. 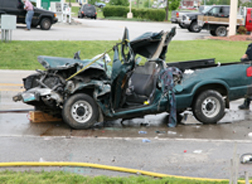 It just may have been a steering problem.

According to a published report in The Herald-Palladium (5/28/14), a Dodge Ram driven by a 54-year-old Hartford man inexplicably rolled over just after 5:30 pm in Bainbridge Township. A passenger in the truck, 46-year-old James Wurtz of Lawton, was pronounced dead at the scene.

Defective products may have led to the single-vehicle crash, as police reported that the steering may have malfunctioned. Both occupants were wearing their seat belts, and alcohol was not a factor. The driver was not injured.

The Dodge Ram, a mainstay in the Chrysler fleet of vehicles, has been plagued with steering problems nicknamed the “death wobble” by disgruntled owners and plaintiffs who have launched lawsuits against Chrysler. The problem, affecting model years 2008 through 2012, is believed to stem from an alleged design flaw affecting the vehicle’s tie rod system - hence the defective steering-system tie rods recall involving the aforementioned model years of the Dodge Ram.

A defective automotive recall is one thing. But complicating matters, according to various plaintiffs, is the wait for parts that has left some owners with no other choice but to continue to drive an allegedly unsafe vehicle for months, while waiting for parts to become available.

The defective products problem is believed to be restricted to the driver-side tie rod system, that can cause a shimmy or wobble that is said to occur at higher speeds.

It was not readily apparent if the Dodge Ram in which the Lawton man lost his life was traveling at a high rate of speed at the time of the rollover. Nor did the report reveal the model year of the Dodge Ram truck involved. However, the police report suspecting a steering problem speaks volumes about what could have happened.

Many of the original defective steering claims against Chrysler were discharged in 2009 when Chrysler filed for Chapter 11 bankruptcy, and most did not survive the reorganization of the company. Masquat was granted a relief stay order allowing her to pursue Chrysler as a nominal defendant - but she was barred from enforcing any settlement or judgment against Chrysler, according to the complaint.

She sees the indemnification of Chrysler by TRW as a way to proceed, almost 10 years after she filed her original complaint citing Chrysler defective steering.

Her lawsuit is Rhonda Masquat et al. v. TRW Automotive US LLC et al., case number 5:14-cv-00638, in the US District Court for the Western District of Oklahoma.