Banquet Pot Pies may not be ConAgra's only product that has been contaminated with salmonella. A two-year-old boy was diagnosed with salmonella poisoning and wound up in hospital for a week after eating ConAgra's chicken nuggets. Could ConAgra be facing yet another recall?

"The chicken nuggets were the last thing my two-year-old grandson ate before he got sick," says Mike Hall (not his real name pending a lawsuit). "He started getting diarrhea, was very lethargic and couldn't eat. His mum thought it might have been the flu so she took him to the doctor and he said it was a virus of some sort. He prescribed a course of antibiotics, but he wasn't getting any better. In fact, he got worse and was very dehydrated.

"A few days later my daughter found blood in his stool—a big fright for her. She and my son-in-law immediately took him to ER and did a fecal test--from the diaper. They confirmed that it was a virus but kept him on the antibiotics. 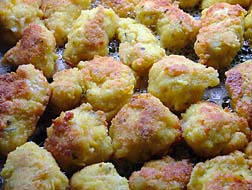 The following day, they had another scare: the hospital called and asked that he come back to be retested. 'It might be a bit worse than we thought,' they said.
That was Sunday. After sitting in the waiting room for about three hours, they finally saw a doctor and this time they were told, after yet another sample, that he likely had salmonella poisoning and would have to be admitted. (I believe it takes at least 24 hours to confirm salmonella from a culture.)

My grandson was also in isolation and had an IV drip—poor little guy. With salmonella, they have to put meds directly into the bloodstream. My daughter, his mother, stayed in the hospital with him for seven days. We went every evening to give her a break but he was never let out of the room.

They asked my daughter what he had recently eaten. I never even thought of the food issue. Obviously we all thought about what he ate to have contracted salmonella, or touched something and put his fingers in his mouth. The first thought was someone at school. We checked with daycare but nobody else was sick.

Next, we tried to backtrack. What causes salmonella? Bad chicken, eggs. But he doesn't eat eggs and his favorite food is chicken nuggets. Sure enough, he had eaten the Banquet brand chicken nuggets. But we didn't blame the nuggets right away. However, that very morning, I watched the news and saw the announcement recalling Banquet chicken pot pies.

It didn't take much to put two and two together. It s not like you see salmonella every day. I phoned ConAgra about two days later and after a lot of waiting and trying to connect, I finally spoke to a human. She was very nice but told me there were no reports of salmonella from the nuggets, only the pot pies. I informed her that there was a report on potential salmonella. She didn't understand at first. Then I said, 'There is a report and I am reporting it!

I wasn't asking ConAgra for anything--I just informed them of a potential problem.

The next day I got a call back from someone else at ConAgra, asking after my grandson's health. He was still in the hospital. 'Well we are just checking on him and we will call you again,' they said. That was about three weeks ago and I haven't heard a word back from them.


READ MORE LEGAL NEWS
More News
My grandson is finally getting better and last Friday we celebrated his first real bowel movement in three weeks. He has been fabulous through the whole thing.

My son is in law school and I asked his advice. He recommended we call the company that is bringing a class action lawsuit against ConAgra. That's when I found you."

In 2003, several [salmonella cases] were traced to chicken strips and nuggets. The British Columbia Centre for Disease Control concluded that, "Consumer misconceptions contributed to the risk of infection. Clear labels identifying nuggets and strips as raw poultry are needed." Cooking instructions on ConAgra's Banquet Pot Pies were misleading and difficult to understand. Could its chicken nuggets instructions need closer examination?