Doreen Jones (not her real name) thought she had a nasty bout of the flu but it was so bad that she wound up in hospital. Her doctor figured she had food poisoning so it was a process of elimination—both physically and mentally—to determine the cause. "I had eaten other foods besides a couple of Banquet pot pies but the doctor had heard about salmonella and the pot pies recall," says Jones.

Jones is just one of hundreds of people who have reportedbecoming sickened after eating Con Agra's Banquet Pot Pies. According to the Center for Disease Control (CDC), 272 victims tested positive for the same strain of the bacteria that was found in the pot pies. That number is likely the tip of the Salmonella iceberg as most food poisoning cases are not reported. Like Jones, most victims think they have a virus or flu. 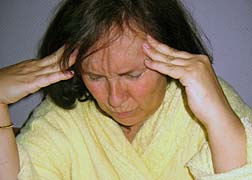 Jones became ill after eating two turkey pot pies—the kind Con Agra at first denied had been contaminated with salmonella. "I ate the first one on Wednesday, October 10th and the second on Saturday night," says Jones. "I went to bed and felt fine. But I woke up around midnight with the shakes, a high fever and diarrhea --the latter lasted seven days."

(ConAgra finally issued a pot pie recall on October 11th, but not before the company tried to blame consumers for failing to cook the pies properly...)

By Monday afternoon Jones knew it wasn't the flu and checked herself into ER. "They took blood, urine and stool samples and gave me an antibiotic," says Jones. "Right away they figured it was food poisoning because of the diarrhea. I got the tests back several days later--positive for salmonella."

Right away, Jones called her grocery store—where she bought the pies-- and they had just taken them off the shelf.

"I was kind of scared, not just for me, because I know people can die from this bacteria," she says. "I've never had food poisoning and I am 50 years old. And I sure don't want it again. It is way worse than the flu. And to be honest, I will never eat another store-bought pot pie again. I told my daughter that from now on, I want to eat like the Amish: make everything from scratch and can a lot of foods. It is a lot safer that way.

"I lost three day's pay at the factory where I work; I would like to at least be compensated for this. My insurance paid my medical bills but at this point I am not sure if I will get a bill for out-of-pocket expenses. I have no idea how much my insurance covers..."


READ MORE LEGAL NEWS
More News
The Salmonella outbreak isn't over yet: the CDC advises consumers to make sure they haven't purchased Banquet or store brand pot pies included in the recall. This recall marks the second time this year that ConAgra has been linked to Salmonella. The company recalled its Peter Pan and Great Value Peanut Butter after more than 600 people were sickened in 47 states. Due to the fact that ConAgra was at first in denial about its contaminated pot pies, this outbreak may be just as widespread.

Consumers can either return the empty package to the store where purchased or mail the UPC bar code with your name and address for a refund to ConAgra Foods, Department BQPP, P.O. Box 3768, Omaha, NE 68103. However, like Jones, you may have incurred medical and other costs and might want to contact a lawyer.