While lawsuits continue to swirl around the October recall of Banquet pot pies and incidents of pot pie salmonella, Banquet parent ConAgra has updated cooking instructions for its product.

However, the recommendations are somewhat unrealistic, as they call for consumers to know what the wattage rating is on their microwaves. Banquet also recommends the use of a meat thermometer, for cooking a potpie.

Back in October, $30 million dollars worth of Banquet potpies were recalled after hundreds of consumers in several states were sickened with salmonella poisoning. Several [lawsuits] are pending after consumers fell ill and were hospitalized after eating a tainted potpie. 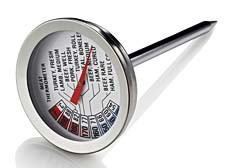 Banquet maintains that while the meat in the potpies was cooked, some of the ingredients such as flour were raw. Flour can carry salmonella—and salmonella was indeed found in some potpies containing turkey.

At the time of the recall, Banquet maintained that the problem was that the affected potpies were undercooked. However, it now admits that the cooking instructions were misleading.

For example, about a year ago a sticker was placed on the package that stated 'Ready in Four Minutes. Microwaveable' an obvious marketing nod to busy families who survive by microwave.

However, on the back of the package, in smaller type that would probably never be read by a teenager careening through the kitchen after school, the package specified four minutes cooking time in medium or high-wattage ovens, versus six minutes in low-wattage models.

Thus, Banquet is recommending that people know the wattage of their microwaves, and use a meat thermometer to ensure correct cooking has taken place. Banquet says that the meat pie should be cooked to 165 degrees, high enough to kill bacteria.

The new packaging recommends cooking four to six minutes in a microwave rated at 1100 watts or higher. Banquet does not recommend cooking in lower-powered models.

Thus, a busy family will a) need to know the wattage of their microwave, and b) be aware of it. The second part of the equation could be the most challenging.

For example, ours' is a busy family. Our microwave was purchased about five years ago. While researching this story, this writer realized that he had no idea what the wattage of his five-year-old microwave is. Thus, he proceeded into the kitchen and turned it upside down and inside out with a flashlight, looking for a model number or a sticker that indicated the wattage rating.

None was found—because the wattage is displayed on the front panel, right above the digital timer. I've been using this thing for five years, and never saw it.

So that's Job One: paying attention to the wattage, and comparing the recommended wattage on the packaging with the wattage rating for the family microwave—which is a throwback to the traditional stove, whereby you had to verify that the oven had pre-heated to the recommended temperature, before putting the food in to cook for the recommended time.

For these new Banquet cooking instructions to be effective, families will have to re-orient their approach to a microwave. Up to now, it's stick-it-in-for-the-required-time-and-hurry-up-will-ya?

Doug Powell, a food safety expert for Kansas State University, echoes those sentiments. He maintains that ingredients for microwaveable foods should be completely cooked.

"These are products that kids are coming home from school and popping in the microwave. Should they know the wattage?"

Or as this writer discovered, even if the number is right under your nose, will you even see it?

It will be interesting to see if this change in labeling will address the concerns, and alter the public perception that with a microwave you just heat 'n serve. Cooking you do in an oven. Heating, you do in a microwave. If microwaveable, pre-packaged meals require specific wattages, and specific time for cooking in order to kill bacteria that could have survived the packaging process, this requirement flies in the face of the larger public perception that ingredients in microwaveable meals are already cooked.

The Banquet recall in October was linked to 272 illnesses, in 35 States.