Could Banquet Pot Pies have Claimed a Life?


"My brother called last week with sad news: our father had passed away," says Al Gibson (not his real name). And shocking news because their father was in good health. Disturbingly, Al found some Banquet pot pies in his dad's freezer and three discarded pot pie trays in the recycle bin. Did their dad die from salmonella poisoning?

From 2 to 4 million cases of salmonella occur in the US annually and it is estimated that approximately 1,000 people die each year due to acute salmonellosis. According to the Centers for Disease Control and Prevention (CDC), foodborne illnesses account for 76 million illnesses, 325,000 hospitalizations, and 5,000 deaths in the United States alone each year. 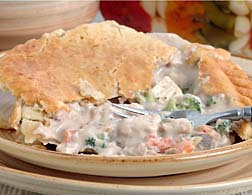 Of all reported outbreaks of food-related illnesses each year, Salmonella is the highest (3,640). But many cases of foodborne illness are not reported because the ill person does not seek medical care; more often than not, they think it is a bad case of the 'flu. It is not uncommon that the health-care provider does not obtain a specimen for diagnosis, the laboratory does not perform the necessary diagnostic test, or the illness or laboratory findings are not reported to public health officials.

Such was likely the case with Al's dad. "When my brother called to say dad passed away, it was a terrible shock," says Al. "He was 78 years old but in pretty good health. He lived alone but a lady used to come by to clean the house and bring him groceries." And she brought him a case of Banquet Pot Pies.


READ MORE LEGAL NEWS
More News
"We drove down to Alabama last Wednesday," says Al. His girlfriend first discovered the pies. "She had seen a recall of the pot pies on TV and when she found them in my Dad's freezer, she went online and checked out the tracking numbers. They matched the recall," he says.

"The detective who dealt with the body said there was vomit on the floor; he said it was mixed with blood and bile. I have to figure out a way of getting these pies tested. My brother visited him Friday night--just a few days before he passed away—and he was fine. They ate pizza together and then my brother went home. I believe he was the last person to see my father alive.

We also kept the discarded tins. I have no idea what is going to happen yet and I don't know if there is going to be a Coroner's report. But I know these pies should be tested."