"What right does ConAgra have to tell me whether or not we had food poisoning?" says Ruth Gordon. "My daughter and I were severely ill for a week after we ate their Banquet turkey pot pies and all they are offering is a refund."

On October 4th, Gordon (not her real name) and her daughter shopped at their local grocery store and stocked up on turkey pot pies. "My daughter is a freshman at college so she is busy and we eat them through the week if we are too tired to cook," says Gordon. "Between the two of us, we go through about 12 a week.

"We had a few for dinner on Friday and on Saturday we had a few more. (I can eat two at a time). On Saturday evening my daughter was complaining of nausea and headache so she went to bed early. The next morning she woke up around 4am throwing up and had diarrhea. About 7am, I also felt sick and had a slight headache. 'Maybe we came down with a virus', I said to her. 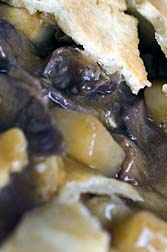 My daughter thought if she ate something she might feel better. So we threw a few more pies in the oven, just before we got ready to go to church. She sings in the youth choir and I could tell she was sick-- she was white as a ghost, standing there in church. 'Mama, my stomach is hurting bad, I just want to go home,' she said.

By that time, I started getting diarrhea really bad. I drove to Wal-Mart and bought two big bottles of Pepto Bismal, along with some 7-up and orange juice. That night she was so bad her shoulders hurt and her joints ached all the way down to her ankles. We'd never had food poisoning before so I had no idea what the symptoms were.

A few days later, we heard about the pot pie recall. I was driving in my car and heard it on the radio. 'Listen up everybody', the announcer said. ' As much as we all love pot pies, you've got to come to a halt eating them. There's been a pot pie recall - Banquet has salmonella.'

Soon as I got to work, I went online and saw that ConAgra had recalled Banquet chicken and turkey pot pies. I didn't panic but said 'Ohmigod, we had food poisoning,' to my co-workers. I had been treating us like we had a virus. I said to my daughter, if that was food poisoning, I don't ever want to have it again. I should have known better because a virus can't attack you that bad.

We had four pies left. I looked in my fridge and the numbers on the boxes were on their recall list. Then I called the 1-800 number listed on the company website. When I called, they had to verify some information from the serial numbers and they asked where and when I bought them. Then they told me to take them back to the store for a refund.

'Wait a minute M'am,' I said. 'My daughter has been sick for over a week and all you can tell me is to take them back to the store? You mean we can't file some claim for sickness?'

'You mean pain and suffering? Well I can take your name and number and turn this over to our claims department. Someone will get in touch with you,' she said.

I asked her when that would be. She didn't know because they had a lot of claims ahead of me. And they were going to return calls in the order they received them. This was Saturday morning, October 13th.

I gave them a week. On October 20th I called back. A customer service rep said the reason we weren't called back was that pain was not a symptom of food poisoning.

'What do you mean?' I said.
'Well, y'all said you had pain in knee joints,' she replied.
According to their website pain was a symptom but she said pain in joints does not count!

Well if that is the case, I will be calling an attorney and let them know how many pot pies we have left and how my daughter and I were sick the whole week,' I said. 'And I'll see what the attorneys say about symptoms of food poisoning.'

She told me to hold the line.

A few minutes later, she asked me to give her the numbers again. Apparently the numbers I gave her were not right. She wanted the barcode numbers, not the serial numbers. She said they wanted the 310 numbers and I didn't give those correct numbers. But they were right there on the box. The woman on the 13th told me that she wanted the P9 numbers on the box - a long strip of numbers that ends with P9.

'I could have given those numbers to the lady last week,' I told her.


READ MORE LEGAL NEWS
More News
Then Mr. Jones called and said he was following up on my complaint. I had to describe our symptoms again. He told us to throw the pot pies away, mail the barcode to ConAgra and they would reimburse us for the cost of the pot pies.

'You're talking like the lady last week,' I said. 'What about pain and suffering?'
'Well, if you feel like you need to be compensated, you have to mail us more information and explain why you should be compensated,' said Mr. Jones.

I went back online and put my information on your complaint page like many other victims did and now the lawyers are talking to me about our case. My lawyer told me not to speak to Mr. Jones again. If he calls back, I have to tell him that I have retained an attorney. I am done with talking to ConAgra."