Yet another food contaminated with salmonella has been discovered. This time the food is Banquet turkey and chicken pot pies, which are being pulled off store shelves across the US. A Minnesota couple that believes their daughter became ill with salmonella after eating a contaminated pot pie has filed a [lawsuit] against the makers of the Banquet pot pies.

The suit was filed by Amy and Joshua Reinert and is the first to be filed since the salmonella outbreak was announced. The couple's daughter, Isabelle, was only 19 months old when she became sick in August after allegedly eating a pot pie. According to the suit, the young girl suffered a seizure, lost consciousness and was taken to the hospital where she was given IV antibiotics and IV fluids. She also suffered diarrhea for almost six weeks after eating the pot pie. 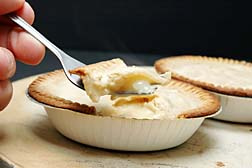 The couple is represented by William Marler of the law firm Marler Clark, who also represented victims affected by the recent peanut butter salmonella outbreak. In announcing the lawsuit, Marler noted that ConAgra knew about the outbreak on October 9, but did not ask stores to pull the pot pies off shelves until October 11, putting many more children at risk of salmonella poisoning.

ConAgra Foods Inc, a parent company of Banquet, makes Banquet Turkey and Chicken Pot Pies. ConAgra has voluntarily stopped producing the pot pies at the Missouri plant but has issued a statement saying that the pies are safe if cooked properly.


READ MORE LEGAL NEWS
More News
Consumers who have Banquet poultry pot pies with the printed code number beginning with "5009" and ending in "P9" or "Est 1059" on the side of the box should not eat those pies as they may be contaminated with salmonella. Generic brands that have a printed code ending in "P9" or "Est 1059" should also not be eaten. Generic store brands include Hill Country Fare (sold at HEB), Food Lion (sold at Food Lion), Great Value (sold at Wal-Mart), Kirkwood (sold at Aldi), Kroger (sold at Kroger), and Meijer (sold at Meijer).

So far, 152 illnesses in 31 states related to the pot pies have been reported to the Centers for Disease Control and Prevention with at least 20 people requiring hospitalization to treat the salmonella. However, the actual number of cases of salmonella poisoning is likely much higher because many people never see a doctor about their symptoms, so the illness goes unreported.

An investigation into the pot pies began on October 5, after several states reported cases of salmonella illness. According to the Centers for Disease Control, the pot pie contamination has been traced back to January 1, 2007.